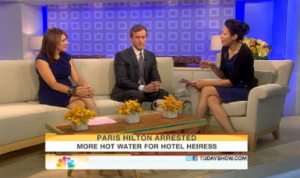 Paris Hilton has been seeing a lot of the police lately. She was detained (but not charged) for suspected marijuana possession in South Africa. Then, last week, the cops were at her Los Angeles home, not for her but for an armed intruder trying to rob the place! Now, to top things off, she’s been arrested for cocaine possession. NBC’s Chief Legal Analyst and Mediaite founder Dan Abrams was on the Today Show this morning to discuss the case and he believes that, depending on the amount of coke found in the purse (which Hilton will likely claim wasn’t her’s), the heiress may be returning to prison.

Going by the laws in Nevada, where the arrest occurred, Abrams explained that a person with less than two grams of cocaine would probably get off with probation. However, if the contents were more than two grams (and definitely if they were more than four), Hilton could be seeing serious jail time. Other factors include the fact that she has priors as well as her fame. While many believe celebrities get lighter punishments in cases like this, Abrams believes that’s not actually true.

“I know that no one wants to hear that. Everyone wants to believe that celebrities get off more easily. Paris Hilton, for example. In her first sentence, the sheriff in that case said that, had it been someone other than Paris Hilton, they probably would have served no time or very little time, meaning less than the 23 days that she served. I think that, in this case, and this is why I hesitate in saying ‘probation’ because, while I think that someone else might get probation, the world is going to be watching. No judge wants to be seen as the one who let Paris Hilton off easy.”

Watch the rest of Abrams’ comments as well as insights from Hollywood Life’s Bonnie Fuller in the video below: