Dan Abrams On Today: When Does Bullying Become A Crime And How Do You Stop It? 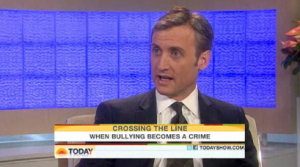 These days, with cyber bullying and anti-gay bullying consistently getting headlines, many parents are wondering what, if anything, they can do to protect their children. Dan Abrams, Mediaite’s founder and NBC’s Chief Legal Analyst, went on Today this morning to give some advice on how to differentiate between regular bullying and a criminal action and what the possible repercussions are.

He used an example of an insulting text message when asked what a parent could do:

“When it’s something like ‘You’re a loser,’ probably not much. But, when ‘You’re a loser’ comes nine, ten, twelve, fifteen times a day on Facebook, on email, on Twitter, et cetera, then it can become harassment. So there is that line to cross between simply saying ‘I don’t like you’ versus ‘I’m now harassing you’ with my belief that I don’t like you.”

When asked what parents should do in these situations, Abrams suggested that they act as if they’re the child’s lawyer and are talking about what’s in the best interest of their client. He pointed out that, many times, children are reluctant to do anything and sometimes the parents will have to be “aggressive.” However, he pointed out an interesting alternative parents can use before going to the authorities, school officials, or the parents of the other child. He noted that sites like Facebook have specific guidelines against bullying and that, sometimes, the easiest method is to contact them.

Check out the rest of the advice as well as information on some of the new anti-bullying laws that states are putting in place in the clip from NBC below: