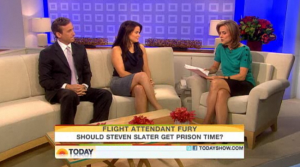 As employee freakout extraordinaire Steven Slater is out on bail and awaiting his inevitable TV career, book deal, action figure series, and exclusive Slater-brand line of “Emergency Slides for Kids,” the Today Show decided to discuss the more pressing question: is everyone’s favorite airline employee (at least since what’s his name landed that plane on a river or whatever) going to wind up in jail? NBC’s Chief Legal Analyst and Mediaite founder Dan Abrams thought it was unlikely. Moral of the story, if you’re going to break the law, do it awesomely.

As Meredith Vieira says, Slater could be facing as much as seven years in prison for his actions. She asked Abrams if he’d see any of it and Abrams was very doubtful:

“ABRAMS: I think it’s unlikely. I think it’s almost certain they’ll reach a deal here. I mean, the prosecutors are saying this is serious and, as a legal matter, it is serious, but there’s also no way they want this case to go to trial.
VIEIRA: Because of all the public support that he’s got?
ABRAMS: Yeah, the public support. You know, can you imagine the jury selection on this case? ‘Have you ever been on an airplane where you’ve been frustrated and angry? Have you ever wanted to punch your boss?’ You can imagine what would happen.
VIEIRA: There’s not a jury that would convict him.
ABRAMS: That’s the point, isn’t it? That the law becomes almost secondary on a story like this.”

The phrase “folk hero” got thrown around quite a bit and throughout the segment, everyone marveled at the kind of instant zeitgeist capturing celebrity that Slater’s gotten. Slater himself seems to be enjoying it as the clips of him bantering with reporters while leaving the prison made clear. He smiled and threw out dry quips as if he was the bastard son of Howard Beale and Paul Lynde.

So, it looks like everything’s probably going to work out for Steven Slater. And isn’t that a sign of our times? Back in the day, folk heroes were always martyred; thrown in jail or taken out with machine guns so that the inspirational Bob Dylan tunes about them could end on a suitably bittersweet note. Now a days, folk heroes just end up as overplayed reality TV stars.