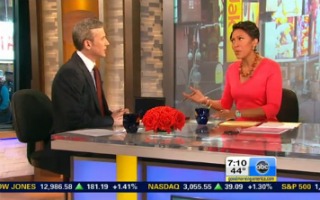 ABC legal analyst and Mediaite founder Dan Abrams weighed in on the latest development in the Trayvon Martin case for Good Morning America on Friday, explaining why it was actually a smart move for George Zimmerman‘s attorney to have not asked for bail for his client at this juncture.

“Judges are human,” said Abrams, “and this is a pretty discretionary call for this judge, based on a whole series of factors like his ties to the community, the severity of crime, the risk of flight. So, the judge gets to make this call and it’s a smarter move to let some of the public anger subside, let some time go by, and then ask the judge to evaluate this, even though they still expect, it sounds like, not to win in that motion.”

RELATED: Judge Napolitano On Whether Zimmerman Can Get A Fair Trial: Move Players To Part Of FL With Less ‘Saturation’

There is still a possibility, he added, that Zimmerman could eventually get bail. “Remember,” he noted, “he’s known for a long time that he was likely to be arrested. He didn’t go anywhere. The authorities knew where he was the whole time, etc. He could certainly argue that in the context of not being a risk of flight.”

He later explained that the next step in the case would be the defense will ask for “effectively, a Stand Your Ground hearing,” presenting evidence in an attempt to show that Zimmerman was justified in shooting Martin that night in February, that he has the “legal right to defend himself.”

Check it out, via ABC: