Dan Abrams To GMA: ‘Stand Your Ground’ Was ‘Not Designed To Protect Aggressor Who Loses A Fight’
Video

Dan Abrams To GMA: ‘Stand Your Ground’ Was ‘Not Designed To Protect Aggressor Who Loses A Fight’ 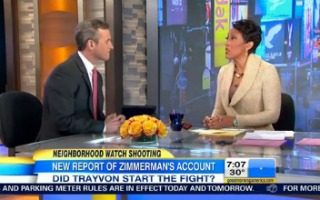 On Tuesday, Mediaite founder and ABC legal analyst Dan Abrams appeared on Good Morning America to explain what impact an eye witness account of the altercation between Trayvon Martin and his shooter, George Zimmerman may have on the ongoing investigation into the shooting. Furthermore, does Florida’s “Stand Your Ground” law apply in light of this account?

Abrams warns that the witness’ account — that Martin had been beating Zimmerman on the ground — in no way decides the case. But it does provide us with “some context as to why the police possibly could have done what they did,” as well as providing “more information as to why, maybe, the police were so quick to accept Zimmerman’s story.”

RELATED: George Zimmerman’s Police Report: Trayvon Martin Approached Him From Behind, Bashed His Head Against Sidewalk

“The ‘Stand Your Ground’ law was not designed to protect an aggressor who starts losing a fight,” Abrams explained. “That’s not what this law is for. And that would not, I do not think, protect Zimmerman in this case. Meaning, if the facts were that Zimmerman goes after him, they get into an altercation, and let’s say that Trayvon Martin starts winning the fight, Zimmerman pulls out his gun because he’s getting scared, that’s not going to protect Zimmerman. On the other hand, what Zimmerman is claiming is, he approaches him, turns his back, Trayvon Martin attacks him. That would be a different scenario.”

“Stand Your Ground” is essentially “protection for somebody who kills somebody else.” Furthermore, he continued, under the Florida law, “if you reasonably believe — and reasonably becomes the crucial standard — reasonably believe that you are in some sort of imminent danger, then you are allowed to use deadly force, if necessary. That’s why this is so tricky.”

“I’m convinced,” he added, “that if the Florida Stand Your Ground law didn’t exist, Zimmerman already would have been charged.”