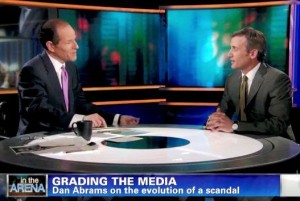 Rep. Anthony Weiner is neither the first nor last New York politician to be caught in the midst of a sex scandal, but he may be the first to have expressed so much indignation at the media for investigating what ended up being true. On tonight’s In the Arena, Mediaite founder Dan Abrams argued that Rep. Weiner truly lost the public not for his transgressions, but for not being forthright, and contrasted the scenario with the program’s host, Eliot Spitzer.

Abrams noted that the media was “initially skeptical because [the story] was coming from Andrew Breitbart,” and never quite picked it up, giving Rep. Weiner the benefit of the doubt. Spitzer then asked what the graver issue in the scandal was– the actual illicit behavior, or the cover-up: “If Anthony Weiner had stood up at the first moment and said ‘let me be open…’ would he have been able to overcome this?”

“He had a much better chance,” Abrams replied, turning to the host by way of example. “Let me ask you…” Abrams began, “I think this is something that you know about.” Spitzer, on his part, seemed to be taken a bit off-guard by the question and initially chuckled, but answered somberly that he had empathy for the Congressman, having been in a similar situation. “I sympathize with Anthony Weiner. I know he is going through torment like virtually no other.” That said, he concluded that Rep. Weiner’s reaction to the discovery did him in: “his greatest sin from the perspective of the public was not being truthful at the moment of crisis.”