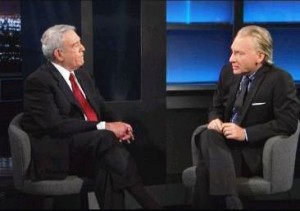 Dan Rather sat down with Bill Maher tonight for a candid conversation about what the news has come to these days with the rise of opinion journalism and consolidated media. In the middle of the discussion, Rather reflected on one of his most infamous reports when he was at CBS: the story of George W. Bush going AWOL during his service in the Texas Air National Guard. Rather asserted that everything he said was true, but “the powers that be” and the Bush administration didn’t like that he was bringing it up, so his departure from CBS resulted from the fallout.

RELATED: Dan Rather Doubles Down On Texas Air National Guard Story: Bush Was A Deserter

Maher first asked Rather for his take on the rise of opinion journalism in the past few years. Rather admitted that it can have a role, but he much prefers to be “an honest broker of information.” And, of course, because this is Dan Rather talking about honest reporting, we naturally have to talk about the Bush story. Rather argued that his report was important because it was a story about the Commander-in-Chief of the U.S. military going AWOL when he served, and recounted how the report ended up making powerful people uncomfortable, which ultimately led to his separation from CBS.

“The powers that be and the corporate structure were very uncomfortable with the story. They got pressured by the Bush administration and others in Washington, and it cost a lot of people their jobs, including myself.”

Rather also touched on the sensationalism of the modern news, trying to make interesting what is important, and reminisced about the time when corporate media owners understood that the news was a “public service” instead of a sole focus on the bottom line.