Dan Savage Says Rick Santorum ‘Has An Anti-Straight Agenda, Too’ 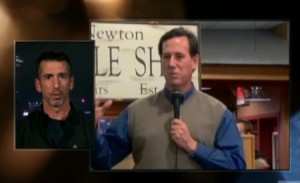 The ascendance of former Sen. Rick Santorum to a near-victory in the Iowa caucuses has Santorum on everyone’s lips, wondering how long the candidate can be a factor in the race for the GOP presidential nomination. There may have been some viewers of Wednesday night’s Countdown, like me, who tuned in hoping for some kind of Howard Beale-meets-Jim Morrison weirdness on the subject of the growing rift between host and network, and were sorely disappointed.

However, activist and columnist Dan Savage did offer some fresh insight into Rick Santorum’s presidential prospects, reminding Keith Olbermann that Santorum doesn’t just have an anti-gay agenda, “he has an anti-straight agenda, too.”

I’m 0-for-3 this week (unless you count reruns of The West Wing as pornography), but Savage’s point is well-taken. Santorum gets a lot of attention for his weirdly-stated, disturbing views on homosexuality, thanks in no small part to Dan Savage’s Google campaign, but his views on heterosexual behavior are arguably farther out of the mainstream. I don’t know many people, conservative or otherwise, who want to wait to get laid until they’re ready to have a baby. Hell, most of us can barely wait through dinner.

Also, conservatives, before you line up behind Santorum’s opposition to sodomy, you really ought to take a closer look at what activities are covered by that label. Let’s put it this way: in Santorum’s America, “Hummers” would be for driving (and overcompensating) only. The only kind of “oral” you’d see would be Roberts.

About that Google campaign, liberals are perhaps justified in their glee over the poetic comeuppance involved, but I agree with Jon Stewart: the bit is wearing thin. It was good for a chuckle, and for a little victim-y campaigning, but the shelf-life is long overdue.

However, Savage revealed a new wrinkle in the Google Santorum bedsheets. ““I’m getting letters from people who think that the neologism came first — [that] this was actually what ‘santorum’ meant and that Santorum was burdened with this unfortunate last name and why didn’t he change his name before he ran for president.”

Okay, that is funny, and an instructive demonstration that is is, in fact, possible to redefine a word.