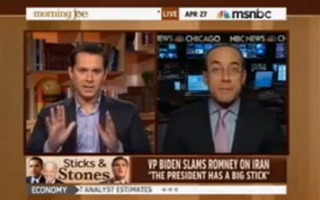 On Friday, author and pundit Dan Senor made an appearance on Morning Joe, where he found himself going head-to-head with both host Joe Scarborough and panelist Sam Stein over foreign policy.

“Look,” said Senor, responding to comments Vice President Joe Biden had made during a speech Thursday, “this notion about the sanctions is just a small point but important point. these are not President Obama’s sanctions.”

President Obama has been dragged kicking and screaming to deal with these sanctions. He did not want to implement them. Don’t take Mitt Romney’s word for it. Take Democratic senators and congressmen’s. Senator Menendez pulled up the Obama administration, dragged them to the Hill and put them in a hearing and raked them over the coals for the administration’s holding up of these important sanctions, including the central bank of Iran sanctions. He came to this lately. He came to it reluctantly. And then saying that this is sort of his contribution to any sort of successful policy. Point one. Point two, Joe, is Syria. Here we are seeing blood-letting in Syria the likes of which we have not seen really, one could argue, since the Balkans

“Dan,” added host Joe Scarborough. “He has tripled the number of troops in Afghanistan, even though I didn’t support it. You can’t call him weak. Tripled the number of troops in Afghanistan. Osama Bin Laden is dead. You have now drones. You now have the rules of engagement for drones weakened even more. We’re launching attacks in countries where we don’t even have a declared war!”

Senor responded by arguing that our country is “actually extremely isolated today.”

RELATED: Barack Obama Is Anything But ‘Our Neo-Conservative President’

Senor and panelist Sam Stein then became embroiled in a heated discussion about what the U.S. should and shouldn’t do abroad and whether Senor’s suggestions are at all sustainable. “Sam, you’re making a very specific point; let me respond in a specific way,” said Senor, explaining that almost 10,000 Syrian opposition fighters “have been slaughtered” and the “the least we could do is give them the resources,” particularly given the Russians are “funding the Syrian army that is crushing the Syrian opposition.”

Stein presented the argument that “over-involvement” in the Middle East is not good for our bottom line, nor “for our perception in the Arab world.”

“How do you think we are perceived in the Arab world today, Sam?” Senor countered as the hosts attempted to segue out of the segment. “Look at these studies, look at these Pew studies. We’re more isolated than we’ve ever been before.”