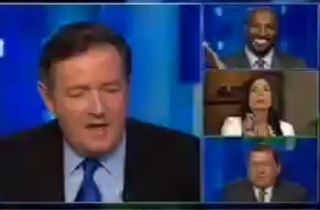 Piers Morgan Tonight host Piers Morgan clearly has not had enough, nor can he get enough of, conservative commentator Dana Loesch. Maybe that will change after the latest episode of the Piers and Dana Show™, in which Loesch triumphantly declared that Morgan “admitted” the “truth” that he is in favor of completely disarming American citizens. In the umpteenth pointless cable news segment devoted to absurd gun nut talking points, though, Loesch appears to have “admitted” that she, in turn, is in favor of unlimited numbers of children being killed with guns.

The “sizzle” in this clip is the steady stream of absurdities that come out of Dana Loesch’s mouth, but the steak is Van Jones‘ absolute nailing of the point I’ve been trying to make about these cable news gun-nut “debates,” a point that Piers Morgan would do well to heed. From Piers Morgan Tonight:

Dana Loesch would probably object to being called a “gun nut,” and point to the term as evidence that liberals are dismissive of those who disagree with them, but she earned the label in a previous PMT segment when she argued that Americans have the right to bear arms equivalent to those of our global enemies. That’s what makes you a gun nut, not a valid concern for the right of self-protection.

This is a reference to the popular gun-nut talking point that assault weapons classifications are mysterious, arbitrary distinctions based solely on the weapons’ appearance, when, in fact, there are specific functional criteria involved. The “confusing” variations arise only out of legislators’ attempts to make assault weapons bans less restrictive, a generosity that has obviously outlived its usefulness.

Loesch also casually dismisses the utility of high-capacity magazines by asking “Do you realize how easy it is to reload? Piers, you can take a speed loader and reload a revolver, 150 rounds. That means he had to reload four times.”

I’m not exactly sure what point she was trying to make here, but it sounds like she is saying that if the Newtown shooter hadn’t been able to use an AR-15 with 30-round magazines, he could have done the same thing with a revolver and a speedloader. It is absurd, but since she brought it up, this is what she’s talking about. She’s talking about the Newtown shooter doing this 30 times in five minutes:

That also means he would have had to carry 30 speedloaders, instead of four 30-round magazines. That’s 30 opportunities for children to run, for teachers to fight back, for police to arrive in time to save some of the 20 children and 6 adults who were killed. Is Dana Loesch insane, or stupid? Put a pin in that for a second.

“The difference between 30 and seven is 23,” Morgan replies. “So it could save 23 lives if there was a federal ban on these magazines.”

“You know what, Dana, seven is better than 30, yes,” Morgan replies.

“I would love to draw the line, Dana, at zero gun deaths in America,” Morgan says.

“So you do believe in disarmament, then,” Dana concludes.

Like a pro wrestling announcer who isn’t in on the con, Morgan is hurt and miffed by this screwdriver to the neck, but he completely misses the implications of Loesch’s “logic trap.” Under her construction, that “seven lives lost are OK,” Loesch’s opposition to any limit on magazine size amounts to an endorsement of unlimited lives lost.

The reason it never occurs to Morgan to turn the tables on Loesch is that his mission is not the same as hers. As Van Jones pointed out, it is the job of gun nuts like Dana Loesch to say anything, anything at all, to prevent a meaningful conversation about gun violence, in hopes that public urgency toward the issue will wane, and the status quo will prevail. I don’t presume to know what Dana Loesch thinks, but I’m fairly certain she doesn’t really believe that Americans should have the right to possess chemical warheads. She’s not stupid or insane, she can’t possibly believe that the tragedy at Sandy Hook Elementary School would have turned out the same if the shooter had been forced to reload 30 times. These are just things that she says to derail the debate.

Most liberals would watch this clip and conclude that Dana Loesch is the villain. The unkindest way to interpret her actions is that she’s cynically trying to exploit this issue to gain fame and exposure for herself, and the kindest is that she sees herself as a bulwark against tyranny, willing to protect the rights she thinks she has, by any means necessary. Evil or misguided, though, Dana Loesch isn’t the problem, Piers Morgan is. He’s the one who keeps booking her on his show, knowing that the result will be pointless arguments like this one.

That doesn’t mean Dana Loesch has no responsibility in this, it just means viewers should have a clear understanding of what that responsibility is. Dana Loesch is a human being, and her responsibility is to act like one. Humanity requires a certain level of empathy, which is not to be confused with sympathy. Loesch views the gun debate through the lens of her own experiences, which do not include having her own child killed by a mass-murdering lunatic. If Dana Loesch’s child had been killed by the 13th shot from a 33-round magazine, during a killing spree that ended when the shooter had to reload, it’s entirely possible that she would still oppose limiting magazine capacity to 10 rounds, or seven rounds. I hope that question is never answered, but I suspect that if she were somehow able to take the full measure of these tragedies, she might not snicker contemptuously through a discussion like this.

Similarly, if Piers Morgan (and other cable-newsers) has truly taken the full measure of these tragedies, he will stop this pointlessness, and book serious people to engage on the topic. We deserve better.