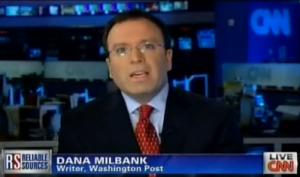 On CNN‘s Reliable Sources, Washington Post columnist Dana Milbank defended a recent column where he admitted even if there is no evidence that Sarah Palin or Glenn Beck inspired Jared Loughner to shoot Congresswoman Giffords, criticism of Palin and Beck is still deserved because “both are finally being held to account for recklessly playing with violent images in a way that is bound to incite the unstable.”

Host Howard Kurtz asked the right question of Milbank in the following exchange:

Kurtz: “It’s fair to hold a talk show host responsible for what some violent or perhaps unbalanced person does because they like what this person says on the airwaves?”

Milbank: “Yes Howie in the aggregate . . . [they] need to worry about that fraction of 1% who just might be driven over the edge.”

Milbank offers the final justification for his assertion by saying “in Glenn Back’s case, I’ve documented a few cases in which it’s led a crazy person to snap.” Therefore Milbank believes even though rhetoric of the right might not be responsible in this case, attacking Beck and Palin now is a legitimate form of “rough justice” for their past sins. Milbank’s argument follows the tortured logic of Media Matters founder David Brock who claimed Beck was responsible for three thwarted assassination attempts either because a psychopath claimed Beck as an influence or some tangential evidence existed to suggest an unstable lunatic may have watched Beck at some point in their life.

What is most disturbing about this week’s entire conversation of “rhetoric” and summed up here, is what if by chance Loughner actually did have a t-shirt from the Beck/Bill O’Reilly “Bold Fresh Tour” or dare I say, had Sarah Palin’s Alaska saved on his DVR? Is it the serious argument of intelligent people that in such a case Beck and Palin would be responsible for the deranged individual’s actions? And even more, that in our society everyone’s free speech should be constrained by what a “fraction of 1%” might construe to be an incitement to violence? If that’s the case then Milbank better stop talking because as the author of an extremely unflattering biography of Beck, he himself could then be held responsible for Beck’s current fifteen operating death threats.

This ludicrous argument that agitators on the right or the left could in any way have culpability for the actions of one crazy person is seemingly so absurd, yet strangely so widespread amongst commentators. Thus Palin and Beck are entirely justified to defend themselves from anyone’s, yes I’ll use the word, libelous implication that they somehow are responsible for a violent act perpetrated by an unhinged “fan.” Beck has thus far laughed off such accusations, while Palin passionately declared them “reprehensible.” Yet no matter their reaction, the fact remains that such false accusations of blame are themselves dangerous forms of rhetoric, and if we’re playing the “words can incite violence” game, then they were likely the cause of yesterday’s death threat made to a Tea Party leader.