Dana Perino Bashes Obama: Where’s Your Speech For Baby ‘Shot In The Face By Black Teens?’ 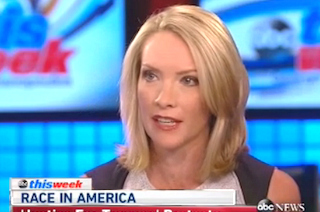 Former Bush Press Secretary Dana Perino continued the weekend’s primary conservative argument on This Week with George Stephanopoulos, when she asked why President Barack Obama chose the Trayvon Martin shooting as a subject for a national address (albeit an impromptu one) but not any other crimes—specifically, the March shooting of a toddler in Brunswick, Georgia by two black teens.

“When a president speaks, it’s to multiple audiences,” Perino said. “So from the prism of self-defense, when you think of a young mother whose two year old son was shot in the face by the two black teens who approached her in Atlanta, and that baby has died—Why do presidents choose to speak about one case and not the other? That’s why it’s better maybe not to talk about any of them. They chose to talk about this one.”

“I do think that the president is signaling: we’re going to have to move on, good luck on Stand Your Ground,” Perino said.

But the one-case-not-the-other cuts both ways, as former Obama advisor Van Jones pointed out.

“The Stand Your Ground situation is very, very problematic,” Jones said. “You have Marissa Alexander, that’s the next big case. She’s the African American woman who tried to stand her ground against her abusive husband. She fired a bullet into the ceiling, she gets twenty years in jail for firing a shot in the ceiling, whereas somebody who fires a shot into a teenager is still walking the streets a free person.”

Watch the exchange below, via ABC News:

Watch the reports from CNN, Fox & MSNBC On March 23rd about the baby shooting in Georgia below: