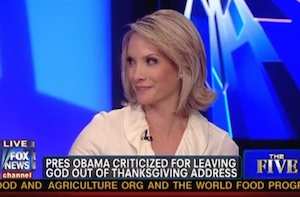 On Friday’s edition of The Five, Eric Bolling criticized President Obama for omitting reference to God in his Thanksgiving message. “I feel terrible — I absolutely think he should’ve had some sort of mention,” Bolling argued. “We’re thankful to whom? About 86% of the country believes in some form of a God — whether it’s Christianity or Islam or what not.” Panelist and former White House press secretary Dana Perino came to the President’s defense, saying she felt there was no substance to the outrage. “I think if you look back at the Thanksgiving messages in the past three presidencies, usually it’s in there. Sometimes it’s not, including the last year of President Bush’s administration. It’s depending on the speech writer at the time and what the president feels like saying. I just don’t read anything in this.”

“I don’t think it’s in question who you’re thankful to, it’s a personal thing,” Perino added. “It’s not a partisan thing. In the last two Thanksgiving messages that Obama’s done, the word God was in those messages, it wasn’t this year. I don’t think there’s anything to read into.”

The subject came about through complaints from the conservative blogosphere that the president was allegedly snubbing God in his speech. Fox News columnist Todd Starnes said President Obama’s remarks were “void of any religious references although Thanksgiving is a holiday traditionally steeped in giving thanks and praise to God.”

Conservative commentator Ben Shapiro went even further — stretching the “Obama didn’t mention God” media narrative to comically ridiculous heights by calling the President a “militant atheist.” “Unreal that Obama doesn’t mention God in Thanksgiving message,” Shapiro exclaimed. “Militant atheist. To whom does he think we are giving thanks?”

“If President Obama had been the very first president ever to not say the word “God” in the Thanksgiving message this topic would’ve been worth doing,” Perino concluded.

Watch Perino defend Obama below over his God omission via Fox News: