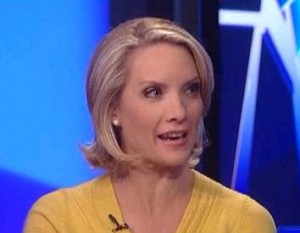 On Wednesday’s edition of The Five, panelist Dana Perino spoke out against the Occupy Wall Street movement, questioning what they really wanted and telling them if they didn’t like America’s economic system they could leave. “I don’t understand, what do they want? They want a different system? There are places in the world with different systems and they are welcome to immigrate to those if they want.”

“If you read the AP article of the event, they actually compared it to the Vietnam protest, the ’60s, the sexual revolution. They never said anything as complimentary about the tea party,” Gutfeld fussed. “I want to be clear about the Wall Street protest. These people are in favor of the Administration. They are not giving it to the man. They are the man. That’s the joke. They’re saying this is organic — this is manufactured!”

“They’re blocking traffic!” panelist Eric Bolling piled on. “People are trying to go to work. People have families and kids. They have to go to work and earn a living and put kids in school.”

Not to be outdone by the others’ anti-Occupy Wall Street disses, Andrea Tantaros dropped a Solyndra (!) reference into the mix. “I saw a woman holding a sign that said, ‘Honk if you have student loans!'” Tantaros exclaimed. “Did anyone tell protesters unlike Solyndra they have to pay back their student loan?”

Sounding like a conservative caricature on South Park, usual voice of reason Dana Perino topped them all by telling demonstrators they could go to another country if they didn’t like America’s economic system.

This utter trashing of Occupy Wall Street by Fox News commentators is hilarious if you remember how they promoted-nay-trumpeted the tea party protests. It’s fascinating how the media narrative at Fox has evolved from the protestors being harmless, smelly hippies to traffic-blocking, agitator shills for Obama that should leave the country if they don’t like Wall Street.

Watch the Occupy Wall Street thowdown below, via Fox News: