Dana Perino to Juan Williams: ‘Liberals Live in Biggest Media Bubble in History of the Universe’ 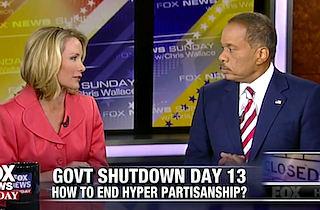 Perino had argued that the conservative strategy that resulted in the government shutdown had been worthwhile, as it had “shaken upo the status quo.”

That was a bit much for Williams. “I don’t think shaking up the status quo is the goal here,” he said. “The problem is that you get people into office who say, when I’m talking to them, they say ‘I was elected to fight Obamacare, I was sent to Washington to shake up the status quo.’ And I think: you were sent to Washington to govern, to represent the interests of the American people, not some small sector.”

“Right now in the Republican Party, the base of the party is in the south, overwhelmly white, and very, very, very conservative,” Williams continued. “And all they do is live in a very small bubble, including a media bubble, and talk to each other, and they are confirmed.”

“And you don’t think that’s true of Democrats?” Wallace asked.

Perino backed him up. “The Democrats and the liberals live in the biggest mainstream media bubble every created in the history of the universe,” she said. “If you look at Republicans across many of the states, governorsor state legislators, Republicans are actually doing really good work, just nationally they’re taking a hit on their reputation.”