Dana Perino: “We Did Not Have A Terrorist Attack” Under Bush 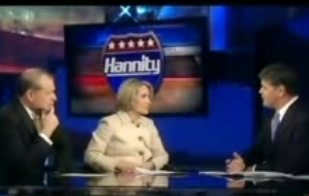 On last night’s Hannity, former Bush press secretary Dana Perino said that “we did not have a terrorist attack on our country during President Bush’s term.” And Sean Hannity and Fox correspondent Stuart Varney didn’t miss a beat: they leapt ahead to an open-and-shut discussion of how the Fort Hood shooter, Nidal Malik Hasan, is a terrorist. 9/11: never forget?

Hannity: Why won’t they say what you so simply said? [that Hasan was a terrorist.]

Perino: You know, they want to do all of their investigations, I don’t know all of their thinking that goes into it. But we did not have a terrorist attack on our country during President Bush’s term. I hope they’re not looking at this politically. I do think that we owe it to the American people to call it what it is.

Hannity:  If you say “allahu akbar” before the shooting and you reached out to al-Qaeda 20 times, it’s a pretty good indication that you’re a terrorist sympathizer.

Varney: What is it, you’re not a terrorist unless you’ve got an al-Qaeda button right on there?

Perino’s statement was definitely jarring, given that the Bush presidency was defined by the terrorist attacks of September 11th and the response to them. But the micromeme that’s popped up on Daily Kos, Democratic Underground, and other like-minded sites of puffing up indignantly and accusing Perino of coverup or treason seems overblown. From Daily Kos: “This is an insult to the entire country but especially to the thousands of families who lost their loved ones on 9-11, to the Anthrax attacks that followed, and on the battlefields of Afghanistan and Iraq.” Uh: maybe she just misspoke?

But: Perino’s attempt to score terrorism-related political points by accusing Obama of trying to score terrorism-related political points was pretty transparent. And it shows how ossified political talking points have become that no one corrected her for saying such a howler: in the midst of a discussion of terrorism, the worst terrorist attack in US history — which occurred less than a year into Bush’s presidency — didn’t warrant a mention.