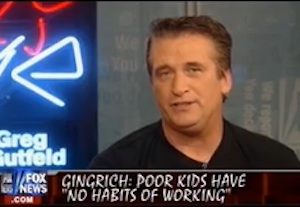 Actor Daniel Baldwin, appearing on Fox News’s Red Eye this morning, criticized Republican frontrunner Newt Gingrich‘s remarks about children from poor neighborhoods having no work ethic. “I think what he was saying– and I think it had a racist overtone to it — because he said the inner city and he turned around and said that a lot of these people didn’t have a shining work ethic, he wasn’t talking about the kids working, but the kids weren’t seeing the parents working. I beg to differ that there’s a lot of inner city parents that work multiple jobs to try to support, they don’t make a lot of money. So I don’t agree with what he said, I thought it was kind of ignorant.”

Watch Baldwin’s criticism of Gingrich’s remarks below via Fox News: