Whoopi Goldberg On Daniel Tosh’s Rape Joke: ‘If It Works, Then It’s Okay’ 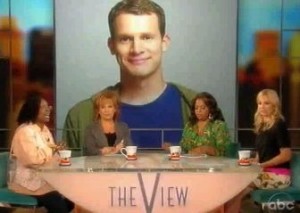 This morning, viewers were given a reminder that three of the panelists on The View had careers as professional stand-up comedians. Hosts Whoopi Goldberg, Joy Behar, and Sherri Shepherd gave their two cents on the recent controversy over a performance that comedian and Comedy Central host Daniel Tosh gave at the famed Laugh Factory comedy club. Apparently, after having his set — in which he’d joked to audience members that “rape is always funny” — interrupted by a young woman who told him that rape wasn’t funny, Tosh asked the crowd, “Wouldn’t it be funny if this girl got raped by, like, 5 guys right now?”

Elisabeth Hasselbeck was mostly confused about why he had to go there at all — apparently the suggestion of “rape” as a topic was something that was shouted out by an audience member (which: YIKES). Joy Behar, Sherri Shepherd and Whoopi Goldberg, however, took the position that if the joke is funny and works, just about anything is fair game. As an example, Behar read a joke of Sarah Silverman’s aloud: “I was raped by a doctor, which is so bittersweet for a Jewish girl” to a big laugh from the audience. It was an interesting position in that it managed to be critical of Tosh’s joke (which they all agreed was unfunny and inappropriate) while also affirming the right of comics to try out new, outrageous material — provided they can take responsibility for it if it bombs.