Darrell Issa On Investigation Into ‘Fast And Furious’: Cooperation With Justice Dept. Close To ‘Zero Percent’ 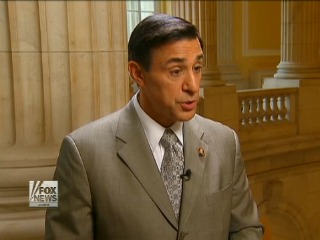 On Wednesday night, Fox News’ Greta Van Susteren paid a visit to the Hill to interview California’s Rep. Darrell Issa (R) about the work he’s been doing looking into “Fast and Furious.”

When asked if the Department of Justice was cooperating with him “100 percent,” Issa answered that, actually, it was closer to “zero percent.”

For those unfamiliar with the scandal, here’s a bit of background: Around this time last year, Mario Gonzalez, the brother of Mexican state prosecutor, was killed and tortured by cartel hit men in Mexico. After news of Gonzalez’s death, U.S. officials kept quiet about the fact that AK-47 assault rifles found in the cartel’s arsenal of weapons had been smuggled into Mexico from the U.S. under the “Operation Fast and Furious” gun-trafficking program. The Christian Science Monitor describes the ill-fated program’s mission succinctly, calling it an “operation to allow nearly 2,000 arms to leave US gunshops via certain traffickers who the US government had identified and thought it could track. The idea,” it continues, “was to trace these ‘straw buyers’ to key cartel figures in an attempt to score major gun busts to prove the US was serious about stopping arms trafficking across the border.” However, the program ended up very likely ultimately arming killers responsible for the deaths of Gonzalez and (potentially over 100, according to some reports) other Mexicans, as well as the death of Border Patrol Agent Brian Terry in Arizona. Whistleblowers have so far informed those looking into the program’s failure that the guns made their way into the weapons cache of three major Mexican cartels: Sinaloa, El Teo and La Familia.

Issa and the House Oversight Committee are now investigating to see how aware the Obama administration had been of the operation, and how high up in the system that awareness went. Issa told Van Susteren that he has sent communications and subpoenas in an effort to gather additional information from the Department of Justice but, so far, it has not been willing to play ball. “This is one of those situations,” he told her, “in which they haven’t admitted that they let guns walk, even though there’s no credible way to say that they didn’t not just let walk, but let them run.”

And while the Department remains quiet, Issa notes, there are thousands of weapons still out there and unaccounted for — and it’s only a matter of time before they’re used to create more bloodshed. He adds that even though the idea for the program may very well have been thought of by someone fairly low down in the system, it would still have had to have been approved by those within its the top levels. He clarified that the purpose of the investigation isn’t simply to undertake something akin to a witch hunt, but to seek productive reform of a system that, it is now obvious, has exhibited certain weak points:

Well, Greta, as you know, we’re the Oversight and Reform Committee. We don’t get reform until you get an admission that this kind of thing shouldn’t have happened, and then you start looking at how it won’t happen again. We’re not looking to go as high as we can for the sake of going high. We want to know where the safeguards have been put in place so this can never be approved at any level, but certainly not in the hierarchy of the Justice Department.

Watch the full exchange below, courtesy of Fox News: