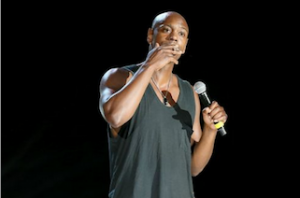 Comedian Dave Chappelle got a lot of grief from fans for running out the clock, while scolding an unruly crowd, during a show on his big comeback tour in Hartford last week. But apparently, it could have been a lot worse. In audio recorded during a Chicago show last night, Chappelle told the crowd that he had to resist calling the “young, white, alcoholics” in the audience a bunch of “crackers.”

Chappelle acknowledged the incident at the top of his set, saying “I took a nasty spill the other night, but I swear to God it wasn’t my fault.” As the crowded cheered, he said they were “so much better than Hartford.”

“I don’t want anything bad to happen to the United States,” Chappelle said, “but if North Korea ever drops a nuclear bomb on this country, I swear to God, I hope it lands in Hartford, Connecticut. That crowd was evil.”

He told the Chicago crowd that his Hartford situation almost turned into something similar to what happened when Seinfeld’s Michael Richards used the “n-word” during a 2006 stand-up show.

“I wanted to pull a reverse Kramer and call them all crackers or something crazy like that,” Chappelle said. “I know that shit’ll be on YouTube. ‘Funnyman Dave Chappelle calls a room full of white people crackers.’ Couldn’t do that. I felt bad when Kramer did that shit to us.”

Listen to audio of Chappelle’s comments below, via YouTube:

And watch Chappelle walk off the stage in Hartford below: