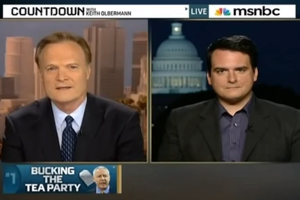 Colorado Republican Senate candidate Ken Buck got into hot water today as audio was released of him calling Tea Party members and, specifically, birthers, “dumbasses.” For a candidate so popular among the Tea Party, many considered it a major gaffe. Vising Lawrence O’Donnell on Countdown tonight, MSNBC contributor Dave Weigel called his comments “savvy” and argued that “this is what smart Republicans should say.”

It wasn’t an endorsement of the language so much as one of Buck’s general attitude, the context of his comment being that he was increasingly uncomfortable with birthers affiliated with the Tea Party movement asking questions about President Barack Obama‘s birth certificate during campaign events. Describing Buck’s frustrating with the birthers as “pretty widespread” despite some Republicans flirting with the movement, he actually argued that those who believed Buck’s comments were offensive to the Tea Party movement were the ones being “patronizing,” as most in the Tea Party, in his experience, are not birthers.

Weigel also weighed in on the fact that Sarah Palin overwhelmingly won a Republican 2012 field straw poll at progressive blogger conference Netroots Nation. To Weigel as well as O’Donnell, it seemed to indicate that those on the left would find her the easiest target to defeat, Weigel calling it an indication that people “sometimes confuse celebrity with credibility.” He also pointed out statistics that show many Republicans would rather support a candidate that isn’t endorsed by Palin than one who is. “We hear a lot of her rushing in to endorse the latest mama grizzly,” he explained, “but we don’t hear a lot about how she’s not popular.”

Video via MSNBC below: