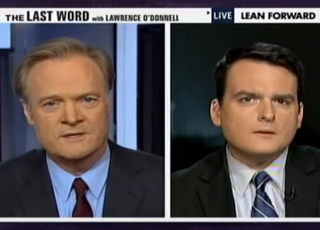 Lawrence O’Donnell smelled blood in the water today, and decided to take yet another bite out of the Tea Party. Mocking what he considered paltry numbers at a rally in Washington, D.C., O’Donnell declared it evidence of certain doom for the American right, though his guest, Dave Weigel, begged to differ: having attended the rally, he attributed the dwindling numbers to the electoral success of the Tea Party, and asserted he wasn’t reading anything too disastrous for the movement in the numbers.

Calling them “sunshine patriots,” O’Donnell argued the small numbers at the rally– attended by, among others, Reps. Michele Bachmann and Rand Paul— signaled the inconsistent levels of passion in the movement, and possibly a permanent decline in their influence by 2012. O’Donnell cited Politico‘s crowd number at 100– a number Weigel jokingly suggested was inaccurate– “I would go as high as 201, 203… but I might have counted the media that was there.”

But the “more press than patriots” turnout didn’t spell out the end of an era for Weigel the way it did for O’Donnell. In fact, he perceived it as a sign of strength. “It’s hard to get people to protest for something they think is already going their way,” he argued, noting that the post-Obama Democrats experienced the same problem in the first half of the President’s tenure, when they were “overwhelmed by Tea Partiers.” Weigel also added that some of the most influential factions of the Tea Party sat this one out, including Freedomworks, so the small numbers made sense. “I’m not too worried for the Tea Party that this wasn’t a huge hit,” he concluded, particularly since “this is a movement that fought really hard to take back Congress.”