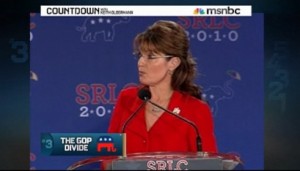 On last night’s Countdown, while discussing Sarah Palin‘s future role in Republican politics, freshly-minted Washington Post blogger Dave Weigel told host Keith Olbermann that Palin could “wave the pom-poms,” before catching himself in a “bad metaphor.” Presumably, he thought the remark might have inadvertently sounded sexist, or even worse, been construed as a comparison to George W. Bush.

The “pom-poms” quote is fun, but the real story here is Weigel’s refreshing presence on Countdown, as he provided clear-eyed commentary on GOP politics, and repeatedly resisted righty-bashing bait from Olbermann. Video of the exchange below.

Weigel was probably right to  err on the side of caution, but his use of the common phrase “waving the pom-poms” wouldn’t likely have caused much offense, especially when offered in the context of a fair-minded analysis of Palin’s true gifts.

In this clip, Olbermann connects Scott Brown‘s Tea Party cancellation with other recent events, like Ron Paul‘s near-victory in the SRLC straw poll, to paint a picture of a divided GOP. On several key points, however, Weigel doesn’t really go along:

Weigel’s analysis is dead on target, and devoid of the snickering tacit agreement you see from other Countdown contributors. He doesn’t buy into the idea that Brown was snubbing the Tea Party or Palin, and correctly points out the danger of overestimating the effects of “distractions” like the RNC “Voyeur” scandal.

Sure, it’s fun to go around calling Palin “half-governor” and relishing her consistently poor polling as a presidential candidate, but if Democrats only get their information from Keith Olbermann, that “half-governor” will sneak right up and rain campaign cash all over them from the side of a helicopter.

Weigel seems to have become a Countdown regular, and hopefully, he will continue to provide welcome respite from a show that often seems like an hour-long exercise in gleeful, but not always productive, high-fiving.