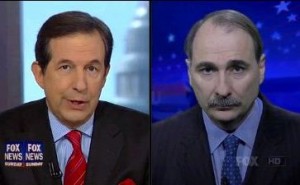 David Axelrod, senior adviser to President Obama, had a tense interview on Fox News Sunday, wherein host Chris Wallace pressed him on the White House response to the recent attacks in Libya. Defending the administration’s response, Axelrod further added that Mitt Romney is “working hard to exploit” the issue.

Asked whether Obama takes “personal responsibility” for the situation, Axelrod replied, “At the top-line level, the president of the United States takes responsibility for everything that happens on his watch.”

He also responded to the Romney campaign’s criticism that Vice President Joe Biden‘s debate response about whether there were requests for additional security directly contradicts sworn testimony of State Department officials.

Wallace also brought up remarks by Stephanie Cutter, Obama’s deputy campaign manager, in which she said the reason Libya has become “the political topic it is, is because of” the Romney campaign. Asked whether he believes this, said there are two separate issues: the serious issue regarding the attack and bringing the killers to justice, and the way the Romney campaign has responded to the attack.

Axelrod went on to accuse the Romney campaign of playing politics with the issue. Referring back to Romney’s now-infamous “47 percent” remarks, he said Romney was looking to take advantage of a crisis.

“There’s no doubt that he’s working hard to exploit this issue,” he said. “From the beginning of this issue, before any facts were known, he was cravenly trying to exploit it.”

Wallace challenged Axelrod, saying Romney was criticized for his initial response, but most aren’t making the politicization argument now.

It’s politics, Axelrod replied, saying he understands. But the president’s concern, he said, is the investigation and justice.

“There is nobody on this planet who is more concerned and more interested in getting to the bottom of this than the President of the United States,” he said. “He feels personally responsibility for every representative he sends around the world.”