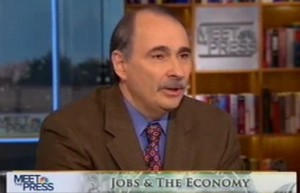 On Sunday’s Meet the Press, senior adviser to President Obama‘s reelection campaign David Axelrod was asked by David Gregory to respond to NJ Gov. Chris Christie‘s rant about President Obama earlier this week. Christie called the President a “bystander” on the deficit deal, and asked “what the hell are we paying you for?”

Axelrod pointed out that Christie endorsee Mitt Romney opposed saving the auto industry, telling Gregory, “I don’t think he’s in a position to talk about who was a bystander.”

RELATED: Robert Gibbs Pushes Back Against ‘Bystander Obama’ Meme On Face The Nation

Axelrod also reminded Gregory that the President led on the deficit way back when, appointing the Simpson-Bowles deficit commission, and put over four trillion dollars in deficit reduction on the table this summer. “He (the President) was prepared to lock arms with the Speaker and move forward on a $4 trillion plan to reduce the deficit,” Axelrod said, “but the Speaker returned to his caucus and he had his legs cut out from under him. That was the end of it.”

It is utterly ridiculous that  the mainstream media continues to act as if there are two sides to this story, and hey, maybe President Obama is the problem here. It shouldn’t be up to Axelrod and the Professional Left™ to point out that the opposition to Barack Obama is so deranged, he had to use an executive order to create that Simpson-Bowles commission, even though it was the Republicans’ idea! This is not some Top Secret Wikileaks deal, this is public knowledge.

President Obama could lead starving Republicans to a Sizzler, and they’d go vegan. If there’s a criticism to be made of the President, it’s that he spent too much time at the table with these guys.Someone should clue Gregory, Bob Schieffer, and the rest of the “he said, she said” MSM in on this.

Here’s the clip, from NBC’s Meet The Press: