David Axelrod To CNN’s John King: Hilary Rosen Is Your Employee, Not Ours
video

David Axelrod To CNN’s John King: Hilary Rosen Is Your Employee, Not Ours 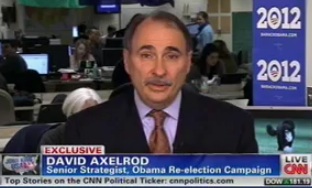 Chief Obama strategist David Axelrod spoke with CNN’s John King Thursday and distanced the campaign from Hilary Rosen‘s controversial comments that Ann Romney had not worked a day in her life. “She actually is your employee, not ours,” Axelrod told King. “She works for CNN. I think CNN would not allow her to be an operative for our campaign.”

King asked Axelrod why Rosen’s comments were such a big deal that Obama, Vice President Joe Biden and multiple other campaign operatives had to condemn it.

RELATED: Obama On Hilary Rosen Comment: ‘I Don’t Have A Lot Patience’ For ‘Commentary’ About Candidates’ Spouses

“I don’t know in the long term whether it will be a big deal,” Axelrod replied. “It was an unfortunate comment, unfortunate for two reasons. In the battle of politics, family are civilians and should be treated as such. They shouldn’t be pulled into the debate in that kind of way as targets. So it was unfortunate from that respect. The other thing is that it did feel like denigration of stay-at-home moms. There are moms that are working that would like to be home and to suggest that you are not working if your staying home, raising a family, often active in the schools and the community and causes, that’s not right. My own wife was a stay-at-home mom and worked harder than anybody I know. Often, the moms are the ones who are handling the family finances as well. It was an unfortunate comment. Hillary has acknowledged that. It is true that the Romney campaign jumped on it like a raft in the deep blue sea. They were drowning under the weight of their own problems. Earlier in the day they couldn’t come up with an answer of whether Governor Romney supported the pay equity law, the first law the President signed and he endorsed and warmly spoke of Governor Walker who just repealed the pay equity law there. I think that has more durable meaning to the women of this country than this,”

“Why so fast to trash, forgive me, my word, not yours, somebody who is a trusted ally of the White House who has been out there defending the President quite a bit?” King countered.

“I think we have an obligation in politics and public life, when someone, even friends, say things that are inappropriate to say so. In certain ways, when your friends say it, there is more of an obligation to do so. I think that’s true on both sides. I’ve been disappointed on the other side of the aisle just recently when Governor Romney and others were not willing to stand up and denounce speech they felt that most people would call inappropriate. I thought we had an obligation to speak and speak very, very quickly to make clear that this didn’t reflect our point of view and that we thought Hilary hould apologize. She did do that. The other thing that we should clear up is that she actually is your employee, not ours. She works for CNN. I think CNN would not allow her to be an operative for our campaign. She is not. She never has been. She is a supporter of the President. The Romney campaign has throughout the day portrayed her as an advisor to the president. That’s simply not true.”

Watch Axelrod’s response to Rosen’s comments below via CNN: