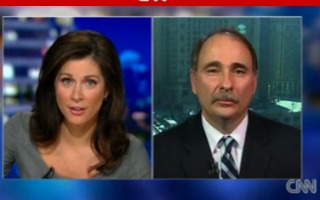 Burnett brought up Axelrod’s condemnation of conservative radio host Rush Limbaugh for having called Georgetown student and activist Sandra Fluke a “slut” and a “prostitute” — a condemnation that proved problematic in light of his decision to appear on Maher’s show given the comedian’s own history of referring to women — mainly, but not solely, conservative women in the public eye, like Sarah Palin and Michele Bachmann — by derogatory names.

Burnett then asked Axelrod if Maher’s recent million dollar donation to a pro-Obama Super PAC should be returned in light of his comments.

Well, first of all, let me say there’s been a coarsening of our political culture. I don’t think that language is appropriate, no matter who uses it. And I think whoever you are in politics, you ought to be willing to say so. I was disappointed that Governor Romney didn’t stand up more forcefully when Rush Limbaugh said what he said.

But understand that these words that Maher has used in his standup act are a little bit different than — not excusable in any way — but different than a guy with 23 million radio listeners using his broadcast platform to malign a young woman for speaking her mind in the most inappropriate, grotesque ways.

Nor does Bill Maher play the role in the Democratic party that Rush Limbaugh plays in the Republican party, where he’s really the de facto boss of the party. Everybody responds to him, which is the reason why I think Governor Romney was afraid to take him on.

When Burnett noted that, as a public figure herself, she wouldn’t appreciate being called a “c-word” by anyone, Axelrod reiterated that he isn’t trying to “excuse” anyone.

“I do not excuse those kinds of characterizations of women,” he said. “I don’t think those kind of gratuitous, nasty words — about anyone — is appropriate in the public sphere. I’m not excusing anyone. But I think what– what Limbaugh did was was particularly egregious. And it wasn’t just once. He built on it and built on it to the point where he built into a sort of perverse soliloquy at the end about, you know, whether she post her…. relationships online.”

“I can respect that,” replied Burnett, agreeing that Limbaugh’s comments about Fluke had been “disgusting.”

As for the whether the Priorities USA Super PAC should or will return Maher’s hefty donation, Axelrod stressed that it would be illegal of him to become involved in the group’s decisions, but “as a general rule, I don’t think those words belong in the public space.”

Later, Burnett reported that Maher’s contribution makes up 15 percent of the Super PAC’s total contributions since it was established.

CNN contributor John Avlon described Axelrod’s response as a “dodge,” noting that a pervading problem in politics is people’s willingness to defend those on “their side,” while condemning those on the other for the same or similar actions.