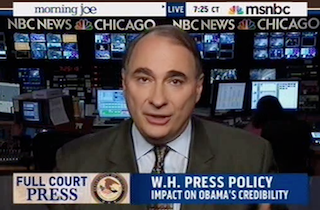 On Sunday’s Face the Nation, host Bob Schieffer was sharp in his criticism of the Obama administration, deeming it the most secretive since Nixon’s. President Obama should “rethink his entire communications policy top to bottom,” he advised. David Axelrod, formerly of Team Obama, responded to Schieffer on Tuesday — and he was “unsympathetic.”

“It’s reached the point that if I want to interview anyone in the administration on camera—from the lowest-level worker to a White House official—I have to go through the White House Press Office,” Schieffer said. “If their chosen spokesman turns out to have no direct connection to the story of the moment—as was the case when U.N. Ambassador Susan Rice was sent out to explain the Benghazi episode—then that’s what we, and you the taxpayer, get, and it usually isn’t much.”

“I think we have to separate out issues,” Axelrod argued. “I do think there are real issues regarding the relationship with the media on this leak matter. Certainly, as you guys have been talking about all morning, the notion of naming a journalist as a co-conspirator for receiving information is something I find disturbing. But the notion that the public should be concerned or disturbed, or that the taxpayer’s being cheated because Bob can’t book the guests he wants, I’m unsympathetic to that.”

That remark prompted Joe Scarborough to question whether Axelrod was dismissing Schieffer’s criticism by chalking it up to whining.

“I don’t think he’s whining,” Axelrod replied. “I think he is doing, from his perspective, what he needs to do, which is nudge more guests to come on his show. Now, I do think the other issue is serious. I think mixing the two is a mistake.”