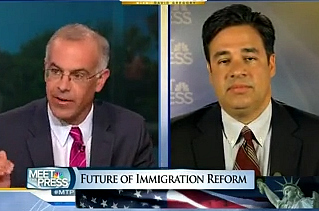 “They put the legalization of 11 million people ahead of security,” Labrador said of the Senate’s immigration bill, despite the fact that the Corker amendment provided for a comically large escalation in border security.

Brooks was having none of this:

“I’ve seen a lot of intellectually weak cases in this town. I’ve rarely seen as intellectually a weak case as the case against the Senate immigraiton bill. The Republicans say they want to reduce illegal immigration; the Congressional Budget Office says the Senate bill will reduce it by a third to half. They say they want economic growth; all the top conservative economists say it’ll produce economic growth. They say they want to reduce the debt; the CBO says it will reduce the debt. All the big major objectives the Republicans stand for, the Senate immigration bill will do. The other things they’re talking about are secondary and tertiary issues. Whether we get 86% border protection or 90%—compared to the big things this bill does, they’re miniscule. I’m mystified.”

“I’m sorry, what I just heard was totally ridiculous,” Labrador said. “If you listen to what the CBO said, they said that it’s going to be between one-third and fifty percent reduction in illegal immigration. That means that every five years we’re going to have to do another amnesty…For somebody to sit here on national TV and say that it is actually a weak argument for us to argue that we want 90% security is beyond the pale.”

Brooks couldn’t believe what he was hearing. “The CBO said it would reduce it by a third to fifty percent, and what I heard the congressman saying is he won’t support it because we’d have to go back and do a Reagan.”

“That’s not what I said!” Labrador yelled. “Don’t put words in my mouth.”

“The current law produces ‘X’ much illegal immigration,” Brooks said. “This law cuts it significantly. It’s better than the current law. Generally when something is better than what we got, generally you want to support that thing.”

Watch the exchange here, via NBC: