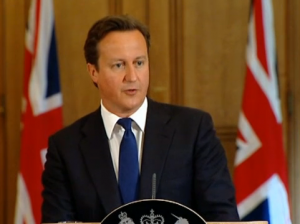 Earlier today, British Prime Minister David Cameron delivered his first public address on the News of the World phone hacking scandal, calling such practices “truly despicable,” and announced two separate inquiries to determine the accuracy of the hacking claims and to investigate the ethics of the British press.

Cameron acknowledged that politicians calling for more media regulation may be seen as efforts “to stifle a free press or even free speech,” but insisted an investigation is the right course of action, and he believes “that it’s necessary and proper to establish a full, public inquiry to get to the bottom of what happened.”

The first inquiry Cameron announced is meant to address “specific revelations and allegations about phone hacking,” and “[a] judge needs to be in charge so there’s no question that it is totally independent and things are done properly.”

The second inquiry is intended to address the larger issue at play, “the practices and the ethics of the British press,” and while it is important to maintain a free and independent press, “press freedom does not mean that the press should be above the law.” He specifically called out the UK Press Complaints Commission for not doing its job, saying it “lacks public confidence,” and in the phone hacking case, “it was, frankly, completely absent.” Cameron expressed hopes that a “new system of regulation must strike the balance between an individual’s right to privacy and what is in the public interest.”

As for how the government will proceed in approving News Corp’s bid to control BSkyB, Cameron said that his culture secretary is “tak[ing] the advice of independent regulators,” but did not comment further on the acquisition.

Cameron made it clear that even though the paper is shutting down, any ongoing or future investigations will not solely focus on the News of the World‘s role.

He even acknowledged the failures of the government in investigating hacking claims in the past.

The truth is, we have all been in this together – the press, politicians and leaders of all parties – and yes, that includes me. We have not gripped this issue. During the last government, a police investigation was undertaken, it was inadequate and not enough was done. There were reports from the information commissioner and they went unheeded. There were select committee reports on phone hacking and there was no follow-up. Throughout all this, all the warnings, all the concern, the government at the time did nothing.

And Cameron even went out of his way to address his close relationship with Andy Coulson, a former News of the World Editor and cabinet minister who was arrested today, and News International executive Rebekah Brooks.

[Coulson] resigned from the News of the World because of the things that happened on his watch. I decided to give him a second chance, and no one has ever raised serious concerns about how he did his job for me. But the second chance didn’t work out and he had to resign all over again. The decision to hire him was mine – and mine alone – and I take full responsibility for it.

On the case of Rebekah Brooks, as I have said, it’s not right for a prime minister to start picking and choosing who should and shouldn’t run media organisations. But it has been reported that she offered her resignation over this and in this situation, I would have taken it.

Labour leader Ed Miliband, responding to Cameron’s press conference, criticized the prime minister for not “lead[ing] the change we need in the way the press works in this country,” and was amazed that Cameron “couldn’t even bring himself to apologize for hiring Andy Coulson.”

At the end of his press conference, Cameron admitted that the people of Britain “have been let down” by the police, the politicians, and the press, and that’s why the inquiries are so important.

Watch the video of Cameron’s press conference below, courtesy of the BBC: