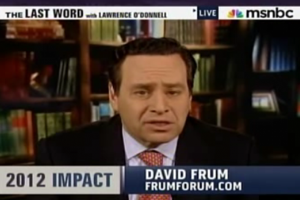 Lawrence O’Donnell‘s Last Word dedicated a segment to understanding Sarah Palin and her “blood libel” claims in light of President Obama’s comments, and needless to say that O’Donnell and his panel– David Frum and Mother Jones’ David Corn— took a bit of an issue with it. But for Frum, her comments weren’t offensive– they were proof Palin was eroding– like a “big melting iceberg.”

So much for abandoning the “usual plane of politics.” While Frum and Corn both agreed that the “blood libel” quote, which O’Donnell harped on repeatedly, was not the most offensive part of the speech for them, and Corn’s problem with it was that, especially in light of President Obama’s speech, was that it was “petty, narcissistic, and ignorant,” Frum merely viewed it as a failed attempt to prove her presidential mettle. “When you apply for a job, you should dress for the job you want,” Frum noted, “She dressed for the job she has.”

But it isn’t merely that Frum thinks Palin did not come off as presidential– she came off even less presidential than she has in the past. “She’s mad– that showed. She’s madder than she is sad. She’s very wounded by what has been done to her,” he explained, a sentiment he found inappropriate in comparison to the gravity of the event she was discussing.

As for her presidential ambitions, Frum concluded with an apt metaphor for an Alaskan politician: “She’s like a big melting iceberg in warm water, and I think a big chunk of ice just slipped off the side.”