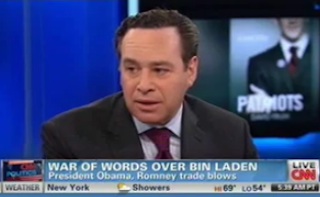 “We’ve been talking a lot about whether or not this Osama bin Laden killing has been politicized for political parties,” O’Brien noted. “Do you think that it has been with President Obama. What’s the line between touting your record in an election year and going over that line and making it sort of political?”

“If this raid had gone badly,” said Frum, “President Obama would have had to wear the blame so because it goes well, he gets the credit. That’s the political deal. And I don’t think anybody in politics should deny him any smidgen of credit.”

“But the next line is Romney wouldn’t have done the same thing, that’s what was said,” replied O’Brien.

“That’s where Romney needs to push back there,” Frum said. “The other important decision in foreign policy this President made was to massively increase the investment in Afghanistan. What do we have to show for that? The Romney response should not be to attack Obama where he is strong on the bin Laden raid. Applaud him for that. Say he did the right thing. I congratulate him. Now, why are we in Afghanistan now? What have we got for it? The President said he wanted to put his eye back on that ball, send tens of thousands more troops there. Spend more money. We’re in no better place than we were and we’re more dependent on Pakistan.”

“He didn’t say that. What he said was even Carter would have made that call,” O’Brien interjected.

Watch Frum’s analysis of Romney’s criticism of President Obama below via CNN: