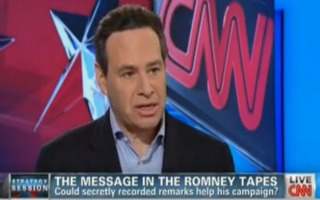 Daily Beast columnist David Frum joined CNN anchor Wolf Blitzer on Wednesday where he denounced Mitt Romney’s comments about the 47 percent in the clearest of terms. He said that Romney’s comments show him to be “angry, divisive and jumpy,” and that they reveal a “destructive” way of thinking.

RELATED: Limbaugh On Romney’s 47% Remark: ‘This Is Such A Golden Opportunity’ To ‘Espouse Conservatism’

Blitzer played a clip of Mary Matalin on CNN who applauded Romney on Tuesday for making those comments. “There are makers and takers,” Matalin said. “There are producers and there are parasites.”

“I think that remark is somewhere between unfortunate and deplorable,” Frum said of Matalin’s comments. He said that the policies of Barack Obama have not yielded a sustained recovery, but he went on to slam the “destructive” way of thinking behind Romney’s comments.

Blitzer said he was surprised to hear Frum denounce Romney’s comments with such conviction. Frum replied that candidates for national office make a lot of mistakes and they should be afforded some slack when they do. However, he said that Romney’s comments break the country up into “virtuous and unvirtious” parts and that is not helpful.

“There are a lot of people on Wall Street who pay a lot of income tax who have yet managed to do more damage to the finances of the United States by bad financial decisions than they’ll ever repay, even if they earn one billion dollars per year,” said Frum.

Frum said that it was conservative activists who launched the “53 versus 47 percent meme” and they have molded Romney into “their robot.” Frum said that those activists will now attack Romney for saying “the lines they fed to him.”

“Americans as a whole do not want the person who puts his finger or her finger on the nuclear button to be angry, divisive and jumpy,” Frum concluded. “The way to run for president is to start by being the president.”

Watch the segment via CNN: