David Frum Talks Syria on CNN: Obama Has No ‘Vision for How This War Ends’ 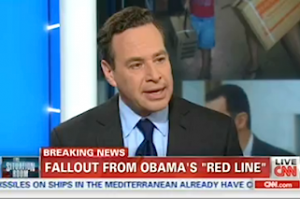 As one of President George W. Bush’s speechwriters in the run-up to the Iraq War, David Frum was one of the most vocal supporters of the decision to invade that country. But the columnist has been taking a very different approach when it comes to Syria, as evidenced by an appearance on CNN’s The Situation Room Friday evening. Frum spoke to Wolf Blitzer about President Obama’s “red line” declaration regarding Syria’s use of chemical weapons, saying the president unfortunately lacked a “backup plan.”

Describing the increased American involvement already happening in Syria, Frum said, “The United States has begun to make a commitment, But without a vision for how this war ends, and who it would like to see in power. And if you decide that the alternatives are as bad or worse than the governing regime and you are putting pieces on the board and committing increasing amounts of credibility, then in the end you’re going to war, not because you have a vision, but because you want to protect yourself from looking weak.”

The man who coined the term “axis of evil” for Bush’s 2002 State of the Union address has made it clear that he does not think Bashar al-Assad poses as significant of a threat, at least to American interests, as Saddam Hussein did a decade ago. He has expressed as much throughout the week on his Twitter account, where he has been posting extended justifications for supporting the Iraq War and not the Syrian strikes.

Below is one such explanation from Wednesday: 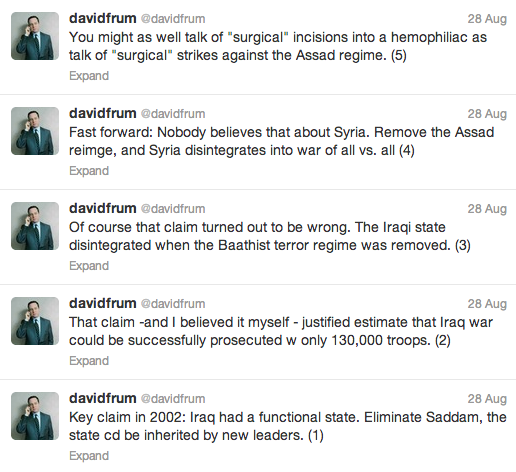