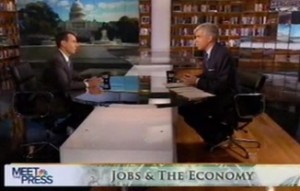 On Friday, Meet The Press host David Gregory promoted the idea that “the President got everything he wanted and it didn’t work,” in an appearance on Morning Joe, and Mediaite challenged the accuracy of that claim. Sunday morning, Gregory changed his tune, somewhat, while interviewing senior White House adviser David Plouffe for Meet The Press, playing the Mitch McConnell quote again, but heavily disclaiming his questions to Plouffe. Even when “working the ref” works, though, it doesn’t always really “work.”

The central problems with Gregory’s statement on Morning Joe were that the President did not, in fact, get everything he wanted, and what he did get actually did work, to a debatable degree. Gregory’s comments were based on a quote from Sen. Mitch McConnell, in which McConnell says, “I know he’s desperately interested in trying to blame anybody else, but he’s the President of the United States, he set the agenda, he got everything he wanted. and it didn’t work.”

While the Senate Majority Leader probably shouldn’t say demonstrably false things, it is the job of journalists like Gregory to call him out for it, not agree with him.

Gregory is obviously aware of the falsehoods in McConnell’s statement. When interviewing David Plouffe on this morning’s Meet The Press, Gregory played that Mitch McConnell clip, but rather than point out it’s utter fallaciousness, he helps McConnell out by tuning up the quote in his followups to Plouffe. “Got everything he wanted” became “he got the biggest things he wanted,” and “it didn’t work” became “they didn’t work out in terms of economic impact the way the administration expected they would.”

He then plays the false objectivity game, saying of Republican refusal to consider the American Jobs Act, “You call that obstruction. They call it principled opposition,” as if they’re mutually exclusive, and as if there is no way an objective person can tell the difference. While the GOP’s obstructionism may be rooted in principled opposition, the fact that they have routinely shot down proposals from the President that they thought of is persuasive evidence that it has overtaken their ability to govern.

Unfortunately, Plouffe does a lousy job of pushing back against McConnell’s characterization of the President’s record, because in order to do so, he would have to acknowledge that it was a handful of Democrats who hampered the President’s efforts early in his term, and by extension, the President’s inability to get them in line. Plouffe is also hampered by the mainstream media’s long-ago established premise that “we kept it from being much worse” is a losing argument, no matter how true it is.

He’s trying to turn around the conventional wisdom that presidential elections are referendums on the economy, and make this election into a choice between the President’s vision for America, and a Republican challenger who will double down on the policies that created this mess. For many of us, it’s really a choice between a Republican Party that wants to return to the regulation-free status quo, and a Democratic Party that has trouble stopping them, even when they’ve got the numbers to do it.