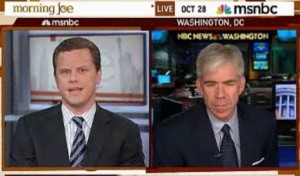 In a moment sure to bring out the Abe Simpson in any member of the Professional Left™, Meet The Press host David Gregory appeared on Morning Joe to make the cockamamie pronouncement that Sen. Mitch McConnell said something which “resonated…that the President got everything he wanted and it didn’t work.”

The only problem with Gregory’s statement is that it’s complete balderdash. Balderdash, I tell you!

Gregory continued, “He got a big stimulus. He got health care reform. He got financial reform. The economy hasn’t moved.”

As anyone with eyeballs can see, Gregory’s statement is wrong at both ends, and full of poppycock in the middle. President Obama didn’t get everything he wanted” in the stimulus, he got a whittled-down, 40% tax cut half-measure that was all he could get past the Republicans and the ConservaDems. Ditto health care reform, which had the most important measure for cutting costs, the public option, stripped from it by the same union of elephants and Blue Dogs. Now, it is valid to criticize the President for not being able to jawbone the turncoats in his own party, when they had unbreakable majorities in both houses, but no one would say he “got everything he wanted.”

As for financial reform, again, there are fair criticisms to be made of the measure, but it is clear that Republicans are blocking even implementation of that half-measure.

Despite all of this dilution, Gregory is also wrong that “it didn’t work,” and that “the economy hasn’t moved.” It actually has moved, a lot, out of 750,000 a month job loss pit, onto a more stable ground of 19 consecutive months of private sector job growth, and a just-announced 2.5% increase in GDP. As the White House constantly says, it’s not nearly good enough, but if you give a dying man some medicine, and he doesn’t die, the medicine “worked” at least a little, right? You don’t turn around and put leeches on him when his rehab runs long, do you?

This is what drives people crazy about the mainstream media. Most of the time, they’re afraid to reach even the most obvious conclusion, preferring to lay out “both sides,” no matter how idiotic one of them is. Earlier in the clip, Gregory presents “both sides,” saying, “Liberals and defenders of the President will say this is the party of no. I think conservatives would say this is the party of we’re going to stop him from doing more. Stop him from hurting the economy further.”

Hey, if only there was someone whose job it is to tell us if the President actually is “hurting the economy,” or if the Republicans really are obstructionist. Hell, that would even create a few jobs!

When mainstream journalists do reach a conclusion, it’s usually felgercarb like this. The trick here is that Gregory technically isn’t agreeing with McConnell. He says McConnell’s quote “resonates” (so does the couch after a big bowl of chili), so he’s still just an observer.

This is the problem with a mainstream press that does nothing but repeat what is said to them. If a lie gets repeated enough, people believe it.