David Gregory: Do Republicans Think They Get ‘Participation Trophy’ for Shutdown?
VIDEO

David Gregory: Do Republicans Think They Get ‘Participation Trophy’ for Shutdown? 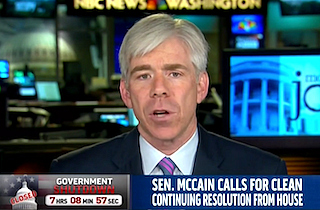 “Is there a participation trophy for Republicans who have engaged in this?” Gregory said, noting that many House GOP members, like Meet the Press guest Raul Labrador (R-ID), had wanted a showdown one way or the other, and picked a government shutdown over the debt ceiling. “At the end of this, it’s, ‘Guys, we’re back to square one. You get nothing for the exercise. The clean CR passes to fund the government for the rest of the year.'”

“There are a lot of people in the House who are horrified by this strategy, too,” host Joe Scarborough said. “It’s like they see this coming, they don’t want it to happen, but they can’t help themselves. They’re doing it anyway. I don’t understand.”

“I have talked to Republican senators who say you can’t blame Harry Reid,” Gregory said. “He actually did something to avoid the shutdown. He passed a spending bill that would fund the government. You can’t say that Democrats have not done anything. This is about a process, that the president and Democrats, and certainly a lot of Republicans, think is an illegitimate process to win a policy game.”