David Gregory Says President Needs to ‘Stand Back and Achieve’ 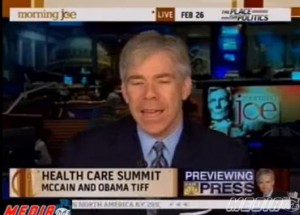 On MSNBC’s Morning Joe today, I heard one of the strangest critiques yet of President Obama. In discussing yesterday’s healthcare summit, Meet the Press host David Gregory said that the President’s ability to debate his opponents is both a strength and a weakness. Why is it a weakness? Because while Americans like their leaders to be fighters, they also want them to “stand back and achieve.” What? I asked Robert Gibbs if he could respond to the criticism.

I wasn’t really sure what to make of Gregory’s criticism, beyond wondering how one stands back and achieves. Is this a game of darts? I found the clip when Salon’s Glenn Greenwald tweeted about it:

While that’s not exactly what Gregory said, I was at a loss to understand what he was saying. My guess is this is another example of the media’s fetish for balance for balance’s sake.

Here’s what Gibbs had to say:

TC:    Two quick questions on health care, Robert. First, this morning I heard an interesting criticism of the President. I’m wondering if you can respond to it. David Gregory was saying that he felt that the President’s ability to engage the opposition was both a strength and a weakness, it being a weakness because the American people prefer — they like a fighter, but they prefer a President who will stand back and achieve. A response to that?

MR. GIBBS: I didn’t see the — I don’t know the context of the comments. I think what the American people got a chance to see, and what they’ve seen over the course of his presidency, is somebody who is willing to sit down, like yesterday, and listen to people’s ideas, to engage lawmakers, and to engage the American people directly in discussions about the problems that we face.

TC: I think maybe he’s saying he’s too much into the weeds — is there anything to that?