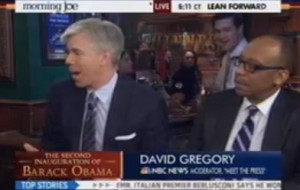 On a very special 2nd Quadrennial Barack Obama Day edition of Morning Joe, Meet The Press host David Gregory provided some more evidence against the mythical “liberal media bias” when he endorsed the emerging Beltway media consensus that in order to deal with debt and deficits, President Obama is going to have to gut Medicare. “He’s got to be able to convince his own party, but also to do something that, frankly, Americans don’t want done,” Gregory said of Medicare, “which is to have to give back some things.”

Notwithstanding his heroic grilling of NRA executive Wayne LaPierre, David Gregory is one of the most reliable sources of mainstream political “wisdom,” the kind of wisdom that has people all over town saying that now that President Obama is actually making progress with a deranged Congress, he needs to start buddying up to them. In this case, what’s significant is that Gregory wasn’t offering merely pragmatic political advice, but actually endorsing the idea that the way to solve our fiscal problems involves cutting Medicare for beneficiaries.

Unfortunately for America, President Obama has already indicated a willingness to move in that direction, having already placed raising the Medicare eligibility age on the table. Raising the age will only shift those costs, at higher rates, and only partially away from the federal government. Those two extra years will either be paid for by the seniors themselves, who will be charged up to 3 times as much for health insurance on the individual market, or by the government in the form of Medicaid for those who can’t afford private insurance, or by private insurance companies.

What no one is talking about is that Medicare is a huge break for private insurers, who get to lay off their highest-risk patients onto the government. People with retiree group health insurance will be covered by their health insurance for those two extra years, at great expense to those companies. The amount of money they pay out in claims will far outstrip what they can take in in premiums, and the additional premiums will fall on those retirees’ employers.

The other problem is that, relatively speaking, 65 and 66 year-olds are bargains for Medicare, and eliminating them from the program would only succeed at making the overall pool of Medicare recipients older and sicker. If there was a way to eliminate the last 2 years of eligibility, you’d be on to something.

It’s doubtful that you’ll hear “watchdogs” like Newsbusters going after David Gregory for showing such a clear policy preference, because when a news figure agrees with you, that’s called “analysis,” not “bias.”

Imagine the bleating if David Gregory, or any mainstream, “objective” journalist, bothered to point out that you can solve Medicare’s solvency “problem” (which is, at ten years’ solvency, the same as it’s always been) by some combination of raising Medicare taxes, making Medicare available to everyone, and, as Chris Hayes constantly points out, giving Obamacare time to kick in, and see what it does to health care costs.

Neither of those examples represents “bias,” of course. What Gregory did on Morning Joe was analysis, it was just bad analysis, wrong analysis. The problem is that this is what Washington lawmakers listen to.

Here’s the clip. from Morning Joe: