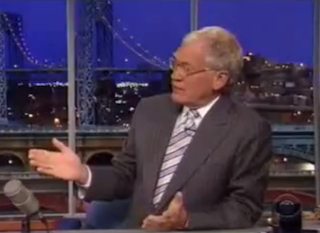 Last night, David Letterman had a bit of fun with presidential candidate Michele Bachmann’s John Wayne/John Wayne Gacy mix up. And who can blame him? That’s the kind of story where you don’t really need to bother your highly-accomplished comedy writers for jokes. Presidential candidate accidentally saying she’s going to channel a convicted rapist and serial killer? That’s funny no matter how you tell it. So, Letterman went over the details and instructed Bachmann to do a little more “homework” before speaking (“What about page two of Google or Wikipedia?”). However, that wasn’t his only advice. He told her she should come on his show or else (statistically) she has no chance of winning.

Why is it necessary for Bachmann to join the man who became public enemy #1 with the Tea Party a couple years ago after telling some jokes that, depending on who you asked, were either the most offensive things ever told or a complete non-issue purposefully misconstrued by Sarah Palin? Well, according to Letterman, no recent candidate has ever reached the White House without first stopping by his New York studio.

“But here’s my point; you’ve got to be very careful and you’ve also got to be on this show. I was going through it and all of the presidents for the past 25 years, the only people who’ve been on this show as candidates have won that office. So, if you’re thinking you can duck us, then just forget about it. If you’re not coming to see us, historically, you’re a loser.”

You can’t argue with that. Hopefully we’ll get to see Letterman vs. Bachmann sometime soon.