David Limbaugh Battles Bill Burton Over Obama’s Legacy on Crossfire: ‘You Ought to Be Ashamed!’
VIDEO

David Limbaugh Battles Bill Burton Over Obama’s Legacy on Crossfire: ‘You Ought to Be Ashamed!’ 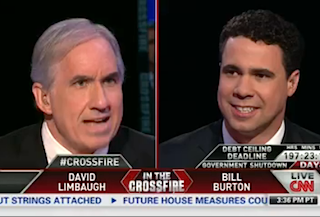 Tuesday’s Crossfire brought together conservative commentator David Limbaugh (brother of Rush) and former President Obama spokesman Bill Burton in a heated debate over the non-existent budget negotiations and looming debt ceiling deadline. While Burton argued that if House Speaker John Boehner (R-OH) would simply bring the budget to vote it could pass with a bipartisan majority, Limbaugh maintained that the GOP should keep fighting the Affordable Care Act at all costs.

Burton attempted to explain to Limbaugh that Obamacare was passed by both houses of Congress and ratified by the Supreme Court. “Shamefully,” Limbaugh said, launching into a speech about Obama’s “narcissism” and how he will ultimately “bring down his own party as well as the nation by insisting on Obamacare.” He added, “He’s never held accountable for his own actions.”

“Except for in an election, where the American people overwhelming reelected him,” Burton countered. When Limbaugh called that fact “mystifying,” Burton laughed and said, “That’s how democracy works!”

Later in the interview, Limbaugh described Obama’s legacy as “the worst recovery in 60 years.” Speaking to Burton and Stephanie Cutter, both former employees of the president, he said, “You ought to be ashamed of his record, with all due respect.”

Burton assured Limbaugh that he was not “ashamed” of Obama’s record, listing off several accomplishments, including saving the auto industry and ending the war in Iraq. “The president inherited a historic disaster of an economy,” Burton said, “and what he’s been able to do through the leadership of himself, his economic team at the White House, partners in Congress is actually bring it back and put us on a path to growth as opposed to the path it was on.”