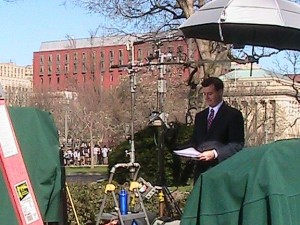 MSNBC’s David Shuster has been absent from Twitter for a little over a month after taking heat from MSNBC for unloading on costume journalist James O’Keefe. In this second preview from my interview with Shuster, I asked him how he feels about the “Free David Shuster” campaign, and Twitter in general.

Since it was fresh in my mind, I also asked him about the interruption-filled Brett Baier interview of President Obama.

On the Baier interview, I tend to agree with Shuster that there’s nothing wrong with a combative interview. With a subject like the President, it can be very hard to maintain control of an interview. Unfortunately, I think Baier employed the wrong tactics here, and he came off looking disrespectful.

For example, when he brought up the 18,000 emails, the President responded that he gets 40,000 a day. Instead of interrupting Obama to say that these are real people, not pundits, Baier should have waited, then offered the President a follow-up along these lines: “Are you saying that your 40,000 are more important than our 18,000?”

Sometimes, when your question’s being danced around, you have to offer the answer you think you’re hearing.

Baier cops to being a bit flustered by the time pressure, and I can relate to that. I don’t think he intended to be disrespectful to the President, even if that’s how it ended up.

As for the substance of it, I thought it was too process-heavy too, but again, that’s not really Baier’s fault. He has a responsibility to his audience, whose steady diet of Beck and Hannity makes them care more about Demon Pass than about the substance of healthcare reform.