David Shuster Says Keith Olbermann Was ‘Mesmerized’ By His Fan Base 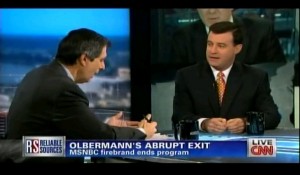 On Sunday’s Reliable Sources, former MSNBC anchor and sometime Countdown fill-in David Shuster lent his own insight into Keith Olbermann‘s sudden exit from MSNBC, telling Howard Kurtz that the fan outpouring in the aftermath of his November suspension played a much bigger role than anything else. “Keith was mesmerized, and flattered beyond belief, by the 250,000 people who signed the petition” to get him back on the air, Shuster said, and when he couldn’t leverage that following with his bosses at MSNBC, decided to take them elsewhere.

Shuster’s input is particularly valuable in this instance, since he’s one of the few of Olbermann’s close colleagues who is free to speak on the record, and has maintained strong behind-the-scenes relationships at MSNBC since his own ouster from the network last April.

Let me follow up with you, David, because you worked at MSNBC for a long time. A bit of full disclosure, you got into a dispute with management and you were taken off the year last year, and your contract has run out. Right?

What are you hearing from your former colleagues? Is there anything that we haven’t heard beyond Olbermann perhaps sometimes going over the top, Olbermann being in a virtual state of war with the top executives and NBC and MSNBC? Is there any other factor here that may have led him to jump even as maybe he was getting a gentle nudge?

SHUSTER: Well, a couple of things. I mean, all the staff that I have spoken with have suggested that this whole event of him giving donations and the reaction to him being pulled off the air was a much bigger story than people think. Not so much in terms of how MSNBC and NBC executives viewed Keith, but in terms of how much Keith viewed his own sort of following.

Keith was mesmerized and flattered beyond belief by the 250,000 people who signed the petition. And he and his new agents who he picked up for the last year felt that that had certain value. And that when MSNBC made it clear that, no, it does not have the value that you think it does, Keith and his team felt like, OK, let’s try to take this base of support, let’s try to take this loyal fan following, and let’s take it to a forum where I’ll have the kind of independence that I’ve always wanted, and I’ll be able to do the sort of reporting and analysis without having my wings clipped by NBC News.

KURTZ: Independence, but he was being paid $30 million over four years. Did he want more money from MSNBC?

SHUSTER: Keith has never been about money, and he’s not somebody who’s sort of obsessed with it.

KURTZ: I would agree with that.

KURTZ: And wanted to be able to say what he wanted without having a Jeff Zucker or a Steve Capus or a Phil Griffin rein him in?

SHUSTER: Yes, or without the possibility in the future that his special commentary scripts might have to be approved by somebody else other than somebody on his show, that they might have to be run through management levels to sort of shake it out and make sure it fits, and what people want. And I think that’s where Keith was very anxious.

It will be tempting for Olbermann’s critics to view this simply as confirmation that this decision was purely ego-driven, while his supporters will see it as evidence of his commitment to speaking truth to power, without interference. The truth is probably somewhere in the middle.

The outpouring of support over his suspension probably did give Olbermann a misplaced sense of his importance to progressive journalism, but not necessarily an inflated one. While he may well enjoy success on another digital platform (he can’t have another TV show until his contract runs out in 2012), he won’t be breaking new ground for liberals in media. At best, he could become a big fish in a very crowded pond.

Conversely, his absence from MSNBC’s lineup could jeopardize the roots that he helped put down for liberals like Rachel Maddow, Ed Schultz, Lawrence O’Donnell, and Cenk Uygur. Liberals have yet to establish a beachhead on any other TV network, and without Olbermann’s numbers to anchor this one, could find themselves watching middle-of-the-road fare like Parker/Spitzer, or more Lock-up repeats.

Cable news is an unequal landscape in which three hours of programming (only on weeknights) is somehow considered to be a counterweight to a 24-hour news network, a symptom of the mainstream media’s discomfort with falsely being called “liberal.” They’re quick to call out MSNBC’s liberal personalities, but rarely have anything to say about Fox News.

As Shuster notes, Olbermann treasures his independence, but not merely out of ego, but because he truly believes that this is what’s best for journalism. Time will tell if he’s right, or if he should have stayed and fought the onerous interference he anticipated, at least until he had another spot on TV.