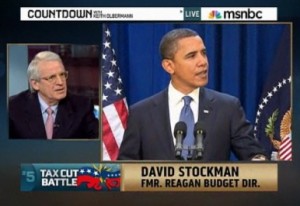 The US Senate plans to vote on the Bush Tax Cuts tomorrow there is little question that the stakes are high. Those on the right argue that cutting tax cuts would only further the current economic recession, and those on the left argue that a large reason for the current budget deficit is in fact tax breaks for the wealthy. On tonight’s Countdown, Keith Olbermann had on as guest David Stockman, better known as the budget director under Ronald Reagan, also known as the patron saint of supply-side economics.

As we’ve reported before. Mr. Stockman is still a proud member of the Republican party but vociferously opposes the Bush Tax Cuts (as well as the alleged proliferate spending by the Democrats.) And while its clear why Olbermann had him on as guest to his show — when was the last time he interviewed a dissenting opinion? — Stockman’s reasoned reply is worth another look.

Stockman’s comments were made more relevant given Howard Kurtz‘s interview with former Bush Communications Director Dan Bartlett in which the former Bush aide admitted that the Bush Tax Cuts was a trap laid for the coming administration:

“We knew that, politically, once you get it into law, it becomes almost impossible to remove it,” says Dan Bartlett, Bush’s former communications director. “That’s not a bad legacy. The fact that we were able to lay the trap does feel pretty good, to tell you the truth.”

Stockman recoiled at that notion, and, when asked how he felt Mr. Reagan fit into the Bush Tax Cuts, Stockman was clear:

Ronald Reagan believed in hard money, not money printing like theFed has been doing for the last ten or more years. He wanted prosperity from hard work, from investment, from entrepreneurial activity. We’ve only had bubbles and booms that were based on debt and money printing at the fed. Those are the opposite of what Ronald Reagan believed in the ’60s and the ’70s and as he went into the White House. And now you have all of these kind of supply siders who basically, I think, are totally distorting what the whole program really was about.

Watch the enlightening interview from MSNBC below: