Day 1 Of The Blago Trial: Patti Blagojevich Stands By Her Man 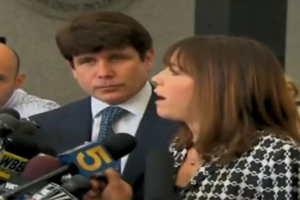 The day of reckoning has come for former Illinois governor and reality TV star Rod Blagojevich, and he’s still singing the same song of innocence he gave the media on Day 1. Arriving at the courthouse for the first day of his corruption trial, Blagojevich received a spirited defense from his wife, Patti, who called this a “good day,” because it was the first step towards her husband’s vindication.

Blagojevich and his husband looked refreshed and ready to take on the day’s activities, and Patti was defiant in front of dozens of reporters, thanking supporters and explaining that she was confident and positive about the beginning of the trial:

It was one of the few times Patti has been front and center at Blagojevich media events (excluding, of course, her memorable appearance on I’m a Celebrity, Get Me Out Of Here!), and it’s refreshing to see that she barely deviates from the Rod Blagojevich formula of amusing press conferences, though her hair could be bigger. The CNN report also shows Rod Blagojevich interacting with the press, shouting “the whole thing’s upside down!” and “God bless you!” at supporters. Yes, there were supporters.