De’Andre Johnson’s Lawyer: He Was Provoked Before Punching Woman

De’Andre Johnson’s Lawyer: He Was Provoked Before Punching Woman 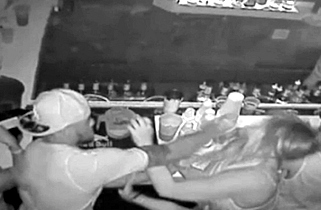 Jose Baez, attorney to now-former FSU quarterback De’Andre Johnson, told NBC News Tuesday morning that the player was provoked before punching a woman in a video that surfaced yesterday.

The 19-year-old quarterback was booted off the team and charged with battery after the Tallahassee Democrat obtained video showing Johnson punching a woman in the face at a bar following an altercation.

But his lawyer said the woman was taunting him with racial epithets and hit him twice before he struck her. Per NBC News:

The woman raised her fist and shouted “racial epithets” at Johnson when the player accidentally made contact when he was walking up to the bar, lawyer Jose Baez told NBC News.

Johnson “tried to deescalate the situation” but the woman “kneed him in the groin area” and “took another swing before he retaliated,” the attorney added.

“It wasn’t until she struck him twice that he reacted,” Baez said. “But he is very regretful that he didn’t turn around and walk away immediately.”

However, Baez added, “He makes no excuses for what happened.”

Baez said Johnson is now reportedly volunteering at a battered woman’s shelter and hopes to play again. “All he wants to do is learn from this experience and move on and get an education,” Baez said. “We certainly don’t want him to pay for the rest of his life for an incident that occurred in a bar.”

Watch video of the incident below. WARNING – GRAPHIC: