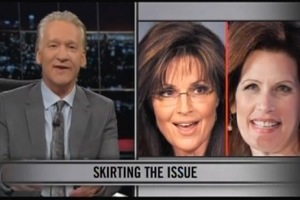 Right after having a an unpleasant discussion about angrily having sex with Republican presidential candidate Michele Bachmann because his guests hated her so much, Maher later took issue with his critics calling him “sexist” for regularly attacking Bachmann and Sarah Palin. Plenty would label Maher presiding over such a conversation as enough evidence to consider Maher sexist. Even though I personally don’t agree with that label for Maher, after his argument here, I think it’s very hard for him to claim he’s not a hypocrite.

“Republicans have to stop thinking up intricate, psychological explanations for why liberals don’t like Sarah Palin or Michele Bachmann. Let me save you all some time, are you ready, because they’re crazy people. People who are not that bright and full of awful ideas . . . trust me it’s not because they have breasts, it’s because they are boobs.”

I get it, Maher viciously attacks Palin and Bachmann not because he hates women, but because he hates the conservative positions in which these two women firmly believe. The question then is quite simple: why can’t Maher similarly “get it” that Tea Party supporters strongly oppose President Obama not because he’s black, but because they hate the liberal positions in which Obama firmly believes? Repeatedly Maher implies or explicitly suggests that the Tea Party generally, and any critics of Obama more specifically, are racists (for some examples, check here, here and here). Instead Maher needs to realize that about half the country might say that regardless of how bright Obama might be and regardless of his skin color, he’s the one full of awful ideas.

The objective here is not to argue Maher shouldn’t joke about Palin and Bachmann. Except for his pointless attack on Newsweek for putting Palin on the cover so many times (she apparently sells magazines, deal with it!) and a probably over-the-top description of Palin as the “leader of a strange family of in-bred weirdos straight out of The Hills Have Eyes,” Maher’s critiques are always very funny. For instance, it’s hard not to laugh at Maher wondering:

“You know what’s really weird? Michele Bachmann tells her husband I’ll do anything you tell me to do and his response isn’t ‘let’s have a three-way’ or ‘I want to cover you in cool whip.’ It’s ‘I want you to be a tax lawyer.’ That is some sick twisted shit.”

Ultimately Maher should not be restrained from entertaining his audiences for fear of being labeled a “sexist.” And in return, Maher (and others) should not be threatening to use the label of “racist” for critics of this President who strongly disagree with his policies, and who want to know that they can speak freely against them.