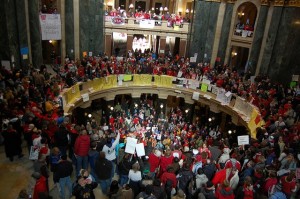 Here’s all I ask, American-television-media-that-complains-about-filling-a-24-hour-news-day: When news happens, cover it.

Tonight, the Republican legislature in Wisconsin took steps to move forward Governor Walker‘s collective bargaining “reforms” (see also, Darth Vader’s rebellion reforms) by removing the elements from the bill that would have required a full Senate quorum. (Slate’s Dave Weigel breaks down the maneuver.) Without, as Senator Barca noted, the legally required 24-hour open meeting noticing requirements. (Barca later indicated that he planned to bring the issue to the Attorney General.) It passed an Assembly committee on party lines, 4-2, and a Senate committee 18-1 (one Republican Senator opposed). The next step: it comes to the floor of each body.

More importantly to TV executives and vieweres alike, the action came with incredibly compelling footage and action. Crowds shouting “Shame!” at the legislators making their way through. Citizens struggling to get in to the Capitol to watch their elected government work. Matt Miller, leader of the decamped Senate Democrats, released a statement:

In thirty minutes, 18 State Senators undid fifty years of civil rights in Wisconsin. Their disrespect for the people of Wisconsin and their rights is an outrage that will never be forgotten.

And what did the cable networks air? Headline News, shortly after the Senate vote, detailed the overdose death of a member of Alice in Chains. CNN focused on the Peter King Xenofest. Fox News was discussing the potential No-Fly Zone in Libya and Chris Matthews on MSNBC actually went to commercial with a tease: did Governor Walker’s released emails indicate he was about to compromise?

But – to his credit – when he came back from commercial Matthews jumped to Ed Schultz with coverage of the situation on the ground. As the hour changed to 8 Eastern, Lawrence O’Donnell picked up the baton, going straight into live coverage, including footage from inside the capitol building. Fox News cut away to the vote results and CNN did the same, covering the action from Madison.

But it was too late. Not only for people wanting to keep up with the news, but after the drama of both critical hearings – hearings that the majority tried to move outside of the view of the Wisconsin (and American) public. I watched it unfold on Twitter for half an hour (through the excellent Twitter feeds of @tcita and Dave Weigel) and turned on the TV to watch people debate a no-fly zone over Libya. No reason that TV producers can’t be as flexible as I am. Don’t blame the 24 hour news cycle for the vapidity of programming when you miss the real stories.

Watch live coverage of the Wisconsin Capitol via Livestream