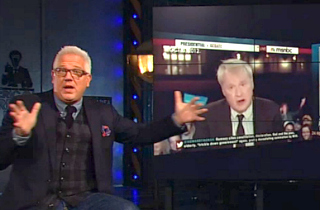 On Tuesday afternoon, it was announced that Glenn Beck plans to relaunch The Blaze as a “global libertarian news network” because he now identifies himself as a libertarian like Penn Jillette and wants to appeal to liberty-lovers who are disenchanted with the GOP and particularly partisan news outlets.

In keeping with the last time I addressed Beck’s so-called “libertarianism,” below is yet another open letter to the conservative commentator.

Congratulations on your slow move towards libertarianism. We are glad for your newfound support for legal marijuana, gay marriage, and your backing down from Bush-era hawkishness.

But many of us libertarians prefer to say “thanks but no thanks” to your attempt to become the “libertarian” leader of a so-called “global news network.”

As I’ve written before, you make it really hard for people who believe in limited government to be taken seriously. In the past, you’ve only given the media more reason to dismiss a largely intellectual movement as being just a bunch of tinfoil hat-wearing, overly aggressive crazy people.

You’re free to call yourself whatever you want. But that doesn’t mean we should accept you. While we agree with you on some of the big picture — government spends way too much money it doesn’t have, and is far too intrusive into our daily lives — many of us dislike your rhetoric and your chalkboard-and-puppets conspiracy version of history.

Look, we libertarians try to operate as a big tent. And I’m happy when non-libertarians like yourself aspire and draw towards it. The Atlantic‘s Jeffrey Goldberg recently pondered whether he is a libertarian, and that’s a welcome step forward for the movement. But when you or (the far, far worse) Alex Jones label yourselves “libertarian,” it is most certainly not a progression for us who already feel marginalized by the political process and much of the media.

Here’s just one example of how you take any semblance of a potentially rational discussion and elevate it to cuckoo land:

In the trailer for your new “libertarian” news network, you tease newsmagazine specials on topics that supposedly matter to liberty-minded folk, like some evil United Nations plot to disarm Americans. Do libertarians believe the Second Amendment guarantees an individual right to bear arms? Yes. Do we generally oppose restrictive gun control? Absolutely. But do we think the federal government is in a cahoots with the U.N. to take away all of our guns? Uhhhh, no. That’s not “libertarian,” that’s fear-mongering with a naked appeal to the large portion of your viewers who already buy into the doomsday survivalist shtick available in your web store.

Sure, some of your more ardent fans will back you up on your self-labeled “libertarianism,” but I challenge you to walk down the halls of Reason magazine and not have them snicker at your bizarro connect-the-dots version of history; or speak before 1,200+ college students at the annual Students for Liberty conference and not be booed or laughed off the stage when you lament the downfall of Western civilization at the hands of pro-gay shows like Glee; or submit an article to the Rothbardian types at LewRockwell.com and not have them pick apart every hysterical myth contained within.

Now, of course, you may say we sound like the cool kids at the lunch table telling the weird kid that he can’t sit with us. But this isn’t the school cafeteria; this is a battle of ideas. And we are currently losing it because of people like you who have helped give limited government types a bad name. Rush Limbaugh makes conservatives look bad on a regular basis; and you assumedly want to be the libertarian version of that? No thanks.

Maybe you are, as you say, a “growing” libertarian — i.e., you’re “evolving,” coincidentally, like the president you dislike so much — but that doesn’t erase the years you’ve spent as a so-called “liberty lover” while almost never criticizing George W. Bush when he was in power. (Believe me. I know that because, in my previous career, it took days to find a single anti-GOP soundbite for a TV special on your fledgling career.)

You’ve built a reputation as yet another right-wing firebrand who absolutely detests President Obama and will link anything and everything to his kneeling nightly before a Karl Marx statuette. It’s not the kind of baggage to carry around when dealing with libertarians who pride themselves on equal-opportunity skepticism of partisans on both sides who suffer from “President From The Other Party Derangement Syndrome.”

BuzzFeed writes that your relaunch as “libertarian” is an attempt to grab the eyeballs of the young people who are disgusted by the two parties and by the “shouting heads” on cable news. If so, I’m not sure you’ll be able to court them.

“If we’re Glenn Beck’s target audience, he’s missed his mark by a mile,” Daniel Bier told me this morning. He runs a prominent blog called The Skeptical Libertarian, which has a readership largely made up of libertarian students and professionals.

During the GOP primaries, most young libertarians rolled their eyes but had their preferred candidates who at least nodded in the direction of libertarianism. That included a bit of Jon Huntsman, a whole lot of Gary Johnson, and an even greater amount of Ron Paul. But were you out there supporting any of these guys while lamenting the big-government-conservative GOP field? No. You supported Michelle Bachmann at first, and then… Rick Santorum, arguably the most anti-libertarian GOP candidate since Pat Buchanan.

And, indeed, young liberty types find the Republican Party and Fox’s treatment of the news to be distasteful but, given that, do you really think that they will then turn to Glenn Beck, the man who has said things like this… or this?

Hopefully someday you can drop the histrionics and the looseness with facts, and then maybe we can all sing “Kumbaya” together under a libertarian tent.

But, in the meantime, I do wish you the best of luck. And since it’s part of my job, I will be watching.