Dear Olbermann And Co., The President Is Not Your Mommy

Dear Olbermann And Co., The President Is Not Your Mommy 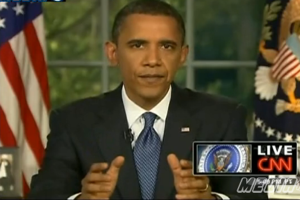 President Obama delivered his first Oval Office speech last night, and it went over like an oil-infused pelican. Everyone from MSNBC’s Keith Olbermann and Chris Matthews, to our own Frances Martel, laid into the speech with the gusto of a chin-impaling bull. Admittedly, the speech didn’t solve all of our problems (and if there’s anyone who could have solved all of our problems with a speech, it’s Barack Obama), but the specific criticisms I’ve read seem childish, and ignore important subtexts.

This speech is actually emblematic of the entire Obama presidency, a study in unrealistic expectations that sometimes go unmet. It reminds me of a passage from Jim Bouton‘s iconic baseball diary, Ball Four. Bouton rolls off a list of advice that coaches shout at a pitcher during a single batter, and notes that the combined wisdom would result in a pitch that you couldn’t make with a sniper rifle.

Most ridiculous is the criticism that there wasn’t enough detail in the speech. It seems Keith Olbermann is convinced that the American people are incapable of digesting any information that isn’t delivered to them from the Oval Office. Maybe the President should also read off the Lotto numbers, so we don’t all throw away our winning tickets. Since day one, we  have been inundated with detail on the administration’s response to the disaster, while it took the media weeks to give a crap about it. Presumably, anyone tuning in to the speech has also seen the ad nauseum computer graphics of the “Top Cap” on every TV show from Real Time with Bill Maher to Yo Gabba Gabba.

Maybe Keith wanted the President to rattle off a list of not-yet-invented energy breakthroughs, and why shouldn’t he? He’s Barack Obama! Give him a grease pencil and those big-ass windows in the Oval Office, and he ought to be able to knock out a cold fusion formula midway through paragraph 3.

Chris Matthews hit the nail on the head when it comes to renewable energy investment. “that’s the hardest thing in the world to do!… that broke Jimmy Carter.”

If America had taken renewable energy seriously then, who knows how far along we would be right now? The natural conclusion to be drawn from our failure to act then is, of course, that we should fail to act now. If it’s anger people want, they should be prepared to take their fair share, for enabling the oil and coal industries with their unwillingness to support renewable energy.

But the biggest problem facing President Obama, and the rest of us, is the inconvenient truth that he’s stuck with BP, but unlike Huey Lewis, he’s not happy about it. The Clean Water Act says that the government has to give BP a shot at fixing this, and once this effort was started, it became nearly impossible to switch horses in midstream. Can you imagine the challenge, for example, of pulling BP off of the recovery, and sending in one or more US oil companies? Have you ever tried to get a Big Mac at shift change?

The President needs to stand on BP’s neck, but not so hard that they choke to death. If BP’s stock continues to tank, and the cost of the spill continues to rise, what are they supposed to pay for it with?  This is why the escrow account is a good first step, but the total cost of this thing could easily outstrip BP’s future ability to pay.

What if BP decides that they’re better off pulling up stakes and doing a Roman Polanski, what do we do then? Do we really want to entrust the livelihoods of all those gulf residents, and the non-toxicity of our coastal waters, to the British court system? Right now, BP is manning the oars on this recovery, and we can only beat them so hard before they just jump overboard. They’re not really fighting us now, but heaven help us if they do.

Then, there’s the issue of the sheer enormity of this disaster. The President is trying to reassure us by not pointing out that we don’t even know if the relief wells will work, or if the “Top Cap” will actually capture 90% of the oil in the interim. This is a problem that no one knows how to fix, and we need a little luck, or at least a break in the bad luck. If not, this Oilpocalypse could kill the whole freakin’ ocean.

Finally, the President is not our mommy. I don’t know about you, but I don’t need a leader who’s going to construct some oil spill “cat heaven” so I can sleep better at night. This is a f**ked up situation, worse than anyone is saying right now, and this is as reassuring as it’s gonna get.

So, to review, the President should have made everyone feel better, while simultaneously delivering detailed statistical breakdowns, policy proposals, and Dilithium Crystal Battery schematics, while also leveling with us that the 90% oil capture and the relief wells will happen if we’re lucky, and telling us that he’s going to command BP to set up an escrow account, and if they don’t feel like it, we can sue them, so those shrimpers might get some money during Sarah Palin‘s first term, and what the hell, Ken Salazar probably should have shut down all 128 deep water rigs as soon as he was confirmed so he could instantly fix decades of lax enforcement, because that would have gone over so much better before the oil disaster, finishing by saying “I know we need to get off of oil, but I don’t think now’s the time to think about that, and besides, I don’t think we can do it. The moon landing was totally a fluke.”